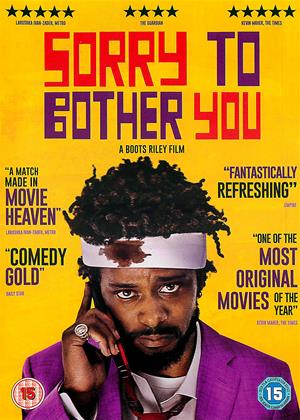 Reviews (10) of Sorry to Bother You

Never finished it. - Sorry to Bother You review by NC

Could not see the point really. Not sufficiently clever or original to warrant the electricity, so never got past half hour..............

Original and then some. - Sorry to Bother You review by RP

Like a lot of films these days, the best way to watch this film is to not know anything about it. You will either turn this film off at various points or, you will keep going hoping for more originality and being pleasently surprised.

What I will say about the film is: this is a low budget film. Some of the editing especially felt like it was a student's film, who has tried to include all of their footage because they worked hard to get those scenes filmed. Thus, the film drags in places, BUT! As soon as I felt it was dragging something new and exciting would happen so I stuck with it and I'm glad I did!

Clever satirical comedy - Sorry to Bother You review by PC

Probably best not to give too much away with regards the story and the many twists, some very weird, but this is a highly original film with much to say about the world we live in. The acting is first rate and some of the artistic flourishes are wonderfully do e on a low budget. If you liked Brazil then this is the film for you, has a Terry Giliam feel to it and I cannot give it a bigger compliment.

Fairly Ridiculous - Sorry to Bother You review by IG

Only watch if you've time to waste; has some funny moments here and there, but, otherwise lacks any meaningful content.

Just not interesting. Overlong - Sorry to Bother You review by rh

This was just not interesting. Possibly it would have made a 45min TV show, like Inside Number 9. But it felt like every one scene was too long and as a result made the film a bore.

Satire, Comedy? Horror? All Three? - Sorry to Bother You review by Dee

Sorry to Bother You is a biting satire about Capitalism

No wait - It's a stylish fever dream about modern life, and also how what you value can warp your sense of self.

No Wait - it's a fantastic film about all of the above.

It's hilarious in it's unsubtly and also shocking in its satire, and very, very clever.

Those that 'get' this movie, are going to love it, others will probably be left scratching their heads. This movie is not for them.

Not funny - Sorry to Bother You review by Jon

So the trailer is funny. The film is not funny. If you want to watch a funny film, then avoid Sorry to bother you. If only I hadn’t bothered :)

The sort of movie stupid people think is clever... - Sorry to Bother You review by PV

The more I watched this movie - which I very nearly turned off before the end several times - the more stupid it became. It's basically a TV comedy show made movie, and probably appeals more to one key racial US demographic.

If you want to watch a real comedy about capitalism then try BREWSTER'S MILLIONS or THE MILLION POUND NOTE, or maybe even WALL STREET or MARGIN CALL.

This is just B-movie trash. Popcorn for the eyes and so forgettable I can barely remember it now. Sill special effects too.

It's certainly original - Sorry to Bother You review by SP

You need to be stoned to enjoy this film. We weren't and I don't think we'll ever get over the experience of watching this film.

However it should be applauded for a very original story.

very odd film - Sorry to Bother You review by JS

Not quite what I thought it was going to be, Didn't find it funny, but maybe to a 65 year old white English woman , there was not much crossover culture.

Sorry to Bother You review by Mark McPherson - Cinema Paradiso

In a movie year of so many surprising and twisty plots, Sorry To Bother You takes the cake as the bluntest, most satirical, and hilariously powerful comedy that makes a statement while weaving a wild tale. To even speak of its story is to nearly ruin the odd rollercoaster this cult commentary concocts. In time, I wouldn’t be surprised if it ranks among the likes of Soylent Green as one of those films you shouldn’t tell anyone about seeing if you plan on viewing. It’s really that much of a treat to avoid spoiling.

Trying to keep this review spoiler-free is a challenge but I’ll give it a go since it really is a film worth talking about and seeing more than once. Lakeith Stanfield plays Cassius Green, a down-on-his-luck black guy struggling to make a buck. He’s recently landed a job at a telemarketing firm in which the recruiter admits the requirements for the job are extremely low. But if you can sell over the phone, you can make a lot of money. The secret, according to his co-worker played Danny Glover, is to use the special “white voice.” It seems to be a power all black people possess in this world as a mere manipulation of standards and cadence causes him to sound exactly like David Cross. He’ll go far with that voice but doesn’t realize just how far it’ll take him into the darker spots of the upscale life.

As the directorial debut of rapper Boots Riley, his film is perhaps one of the boldest when it comes to the effects of warped capitalism. This aspect comes in the most blatant forms of satire with the slave-labor camps of a factory offering housing and work, as well as a game show where contestants are literally beaten up for money and entertaining a bloodthirsty audience. Things get even crazier when Cassius goes deeper into the world of the elite, revealing a business plan weird enough to be worthy of the likes of They Live. It goes overboard with the odd to makes its points loud and clear while still presenting strange and entertaining tale.

A lot of films that set ambitions high with these alternative and allegorical futures always tend to veer too far off course, but Riley’s film always seems very much on point, never getting lost in all the craziness that mounts higher around Cassius’ rise to the top of the golden ladder. There’s a lot of little stuff the film never dwells too long upon, from Cassius’ girlfriend’s (Tessa Thompson) symbolic earrings that change with every scene to the imagery of Cassius entering the homes of the people he speaks with. The visuals are never made fully clear if they’re inside his head or happening in reality, made all the more confounding by a forehead injury he receives halfway through the film that refuses to heal. And I absolutely adore how unapologetic the film is with these scenes, never fully revealing the true nature.

It’s no surprise that a story as telling and fascinating as this one came from a personal place for Boots Riley and his time as a telemarketer, becoming accustomed to the power rankings of a company, the temptation of wealth, and loss of self at the cost of freedom. It’s a film that has just right amount bluntness and subtlety presented as subject to many rounds of dissection with its numerous and telling details. It’s not an easy film to watch or digest, for more reasons than one but touches upon something profound in its colorfully vivid atmosphere of a world gone mad for wealth and status. I can only offer my strongest of recommendations to see the film without revealing its true twist that is designed to be equal parts allegorical, shocking, hilarious, and horrid. Thank or hate me later.