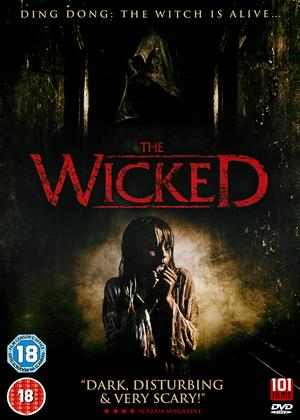 Reviews (1) of The Wicked

This reminds me very much of the Nancy Drew television series from the late 1970’s, but with a sprinkling of sporadic gore. Panic sets in in a small town when a little girl is taken from her bed late one night. Legends of a witch (Cassie Keller) living in the woods abound, so it probably isn’t wise to go searching for that very house – especially if you’re ‘a group of friends’ who think it might be a good idea to throw stones through the windows.

The teenage ensemble are less obnoxious than similar teen-casts, and the performances are quite good. There’s even a suggestion of diversity, when one girl (Sammy, played by Diana Weston) is rumoured to be a lesbian – she isn’t. The ‘scares’ are pure cut-price CGI Disney, despite some spookily set-up scenes.

Late on, when the witch captures some of the youngsters, their fate is more than faintly bizarre and might succeed in raising a smile rather than have you fearing for their lives. Looking like a cowled Darth Maul before slowly becoming more beautiful (and far more effective) the more her victims are drained, her reveal coincides with events succumbing to the familiar slasher format.

It’s a very odd project, is ‘The Wicked’. It’s a horror film, but seemingly made by people who have no idea what makes horror work. It isn’t down to a lack of budget, as apparently $1.5 was spent on this. It’s a world where the law enforcers are blatant pantomime bad boys, where there is plenty of dry ice and sinister music but absolutely no atmosphere and despite the characters screaming and panicking enthusiastically, it isn’t in the least bit frightening. Not without merit, this doesn’t really deliver the goods as the horror film it sets out to be.