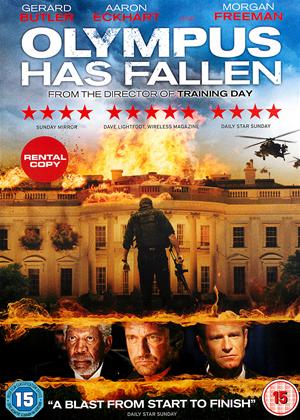 Reviews (1) of Olympus Has Fallen

Fallen for every cliche in the Hollywood book! - Olympus Has Fallen review by CS

Nothing new or different here, just your bog standard disaster action movie. This would have been quite a good film if it had not been for all the excessively typical American Patriot flag waving and the typically nauseating America saves the World routine, with of course a little bit of good old fashioned God fearing thrown in as well, as we have come to expect from almost every big Hollywood Blockbuster nowadays! It's a shame because take all that out and it would have been a good action movie, but this really is strictly for the American market and I feel that elsewhere the Good ole US of A routine will be seen as just a bit too sickly sweet for worldwide consumption, especially in the European market!!

Gerad Butler stars in this all American action by Training Day director Antoine Fuqua as a disgraced secret service agent who, following a terrorist attack on the Whitehouse (codenamed Mount Olympus) and the kidnapping of the President, is forced to use his inside knowledge to thwart the plans of Korean mastermind Kang.

With a plot that even on paper seemed painfully formulaic Olympus has Fallen does everything you would expect of this calibre of American action movie; so much so in fact that the film very quickly becomes boring and unimaginative.

On the surface the plot has just as much, or little, to offer as the majority of Hollywood action films, what it lacks however is any substance of character – even something as simple as the wise-cracking side kick would have provided a little comic relief. Instead the film caters entirely for the safest, blandest and most obvious palette; Butler’s secret agent Banning is a dyed in the wool patriot who would take a bullet for his President – but there is nothing to compliment his personality further save the briefest interchange with his wife that suggests working for your country doesn’t leave too much room for romance.

The other casting choices are equally predictable; Aaron Eckhart with his square jawed good looks is a caricature of an American president whilst Morgan Freeman phones it in as the Speaker of the House.

There is nothing particularly hateful about Olympus has Fallen, just an overwhelming sense of dissatisfaction as you watch with the knowledge that all involved really could have done better.