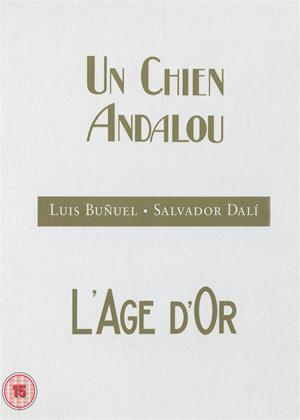 Although he's remembered as the ultimate Surrealist film-maker, Luis Buñuel only made three films under the official Surrealist banner, and this set includes two of them (the third is the seldom-shown "Land Without Bread", a dreary documentary about poverty in rural Spain). Salvador Dalí is mentioned in the synopsis as his creative collaborator on both films, but Buñuel later said that Dalí contributed very little to "Un Chien Andalou" apart from some basic ideas, though he does have a cameo as a priest tied to a piano stuffed with rotting donkeys (Dalí, not yet sporting his trademark mustache, is the priest on the right). Dalí had nothing at all to do with "L'Age d'Or".

Of the two films, "Un Chien Andalou" is far more successful. Its 16-minute running-time allows it to be a non-stop barrage of incredibly strange imagery that makes no sense whatsoever, yet seems to matter a great deal to the central characters, a man and woman whose relationship is troubled to say the least. It manages to swerve between weirdness, comedy, and visceral horror - a certain shot was by far the most horrific image ever to appear in a movie at the time, and is still hard to watch today. You'll definitely know it when you see it! By the way, that's Luis Buñuel wielding the razor. The ultimate Surrealist movie, except perhaps "Eraserhead", which could easily be set in the same world. Unfortunately, its short running-time means that Disc 1 contains 16 minutes you want to see, and two hours of dull extras you probably aren't all that interested in.

"L'Age d'Or" is much more ambitious, and has quite well-known character actors in the two leading rôles instead of amateurs, but this tale of an oversexed couple experiencing bizarre relationship problems (again) dilutes the strangeness to the point where it sometimes becomes almost Pythonesque, mainly due to its feature-length running-time. Though it does have its moments, notably a shocking murder committed for the most trivial reason imaginable, and the two leads give it everything, especially Gaston Modot as a man permanently teetering on the brink of uncontrollable public displays of sex or violence, and frequently giving in to his impulses. Watch out for the great Surrealist painter Max Ernst as the leader of a band of embarrassingly useless guerrillas. Although it's nowhere near as fearlessly intense as "Un Chien Andalou" and contains much less extreme imagery, this film managed to be banned in many countries for decades, owing to the scene in which someone who is apparently Jesus Christ is shown emerging from a recently concluded orgy.