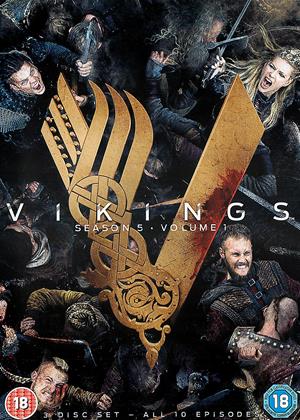 I give this 3.5 stars rounded up - it's not as good as earlier series, as great characters die and leave. It is still watchable though with plenty of violence, family feuding, Viking atrocities etc.

First, the comedy: it is truly hilarious to watch all these pretty Vikings with peachy faces with barely a blemish, so well dressed and with perfectly complete and white teeth. The Vikings must have been brilliant dentists eh? And then the many female warriors - all pretty lookers with long blonde hair, who behave just like women in 2020! This all says way more re #MeToo than about the 9th century. And now even gay/lesbian storylines.

History is interpreted here to meet 21st century audience expectations. There are historical facts as with Ivar the Boneless (who may have just been impotent not a 'cripple') and Alfred becoming king (though in real life 2 of his brothers ruled for short periods before him) and the Vikings did take York etc. It's a fascinating glimpse into the 9th century BUT huge liberties have been taken with plot etc. For example, is there really any record of Vikings in Saharan Africa? And actually, Muslims did not make women wear burqas until they stole the idea from Byzantine Christians in the 111th century.

But it's all gory and bloodybathy, and some real grand guingnol keeps things splattering along nicely.