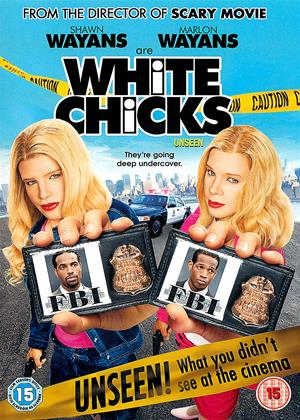 Hey, Yeah im talking to you.

Wanna know what white chicks is all about, well i'll tell you, its a comedy that i think is the best one this year.

I've could see it over and over again.

Its one of them films that makes you laugh out loud.

So i am not asking you, im not advising you, i am telling you go watch it nowwwww!!!!

I saw this film mentioned on social media in the light of all the woke BLM banning of whites in 'black' roles and the demand for blacks in traditionally white roles, so thought I'd give it a go.

And I must admit I enjoyed this - as a trashy Friday night movie.

Some laugh-out-loud moments here. Some clever stuff, and gags. Acting very visual as is needed. Lots of jokes re race relations in the USA - which do not apply as much in the UK (which is 3% black only). But I laughed! It's funny, in parts - and the make-up etc is impressive, to be honest.

Of course, this movie could only be made with black actors becoming white not the other way round, not these days anyway. So a massive double standard there. I think Michael J Fox played SOUL MAN in the 80s? Then there is the classic TROPIC THUNDER - though these days people would be too scared to make those movies, sadly.

The characters, voices and even plot if lifted from probably the best Hollywood comedy ever made: SOME LIKE IT HOT. And no worse for that. Gender bending is an ancient tradition, used in Shakespeare and ancient Greek drama, and this is part of that tradition.

Not sure if the WAYANS actors are sons of the director or related? A family affair, it seems.