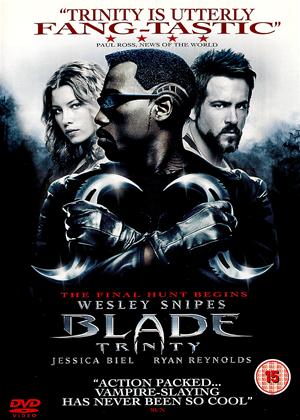 Like Elektra, X-Men and Spider Man, Blade is yet another creation by Marvel Comics guru Stan 'The Man' Lee. Like X-Men and Spiderman it sticks very well to the original plot lines and story of the half human, half vampire anti hero that now hunts the blood suckers even as he struggles to control the 'thirst' that rages inside of him.

The first two films delivered as does this and rounds off the trilogy very nicely indeed. Snipes is at his martial arts, butt kicking best and delivers his lines with the gravitas required. Hell don't expect great acting, although he has proven he can act, Last Boy Scout, Passenger 57 and Liberty Stands Still prove that, but nevertheless he plays the part well and looks impressive in the fight scenes.

And the action comes thick and fast, with great sword play and gun fights and enough thumping action to appease any action fans. And comic book readers fear not, this is a top notch adaptation and the whole series has treated this character well. Don't be put off if the hero isn't known too you like Spider Man or the Hulk (I had to explain to my partner who the guy was before we saw the first movie) get this film, and enjoy the ride or better yet, get some beers in, grab some popcorn and play all three back to back! Go on I dare ya!!

I really liked this movie. I liked the earlier blade movies too but this is very different. I found the the first movie darker with a stronger storyline; they've got gradually more like the spiderman comic books: More action, funnier, a few serious moments, vunerable hero's and gung-ho fights. Culminating in trinity which is just like either a Capcom streetfigher game or as I said a spiderman comic book (pre-all that crazy alien costume stuff).

Anyway, I liked the supporting roles, thought the hellian hottie Abigail adds great eye candy and fighting envy to the movie; Hannibal is superb as a... Well whatever he is (annoyed sex toy with a funny streak?), good addition.

I watched it twice (in a row) just cos' it entertained me on a boring wednesday afternoon. Story's ok, action good, effects good, gags excellent, I liked the acting and the villains too.

Would be in my collection for entertainment value.

Better than the final Matrix.