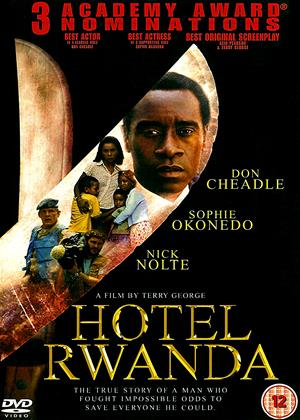 Synopsis:
Ten years ago some of the worst atrocities in the history of mankind took place in the country of Rwanda and in an era of high-speed communication and round the clock news, the events went almost unnoticed by the rest of the world. In only three months, one million people were brutally murdered. In the face of these unspeakable actions, inspired by his love for his family, an ordinary man summons extraordinary courage to save the lives of over a thousand helpless refugees, by granting them shelter in the hotel he manages.
Actors:
Don Cheadle, Sophie Okonedo, Joaquin Phoenix, Xolani Mali, Desmond Dube, Hakeem Kae-Kazim, Tony Kgoroge, Rosie Motene, Neil McCarthy, Mabutho 'Kid' Sithole, Nick Nolte, Fana Mokoena, Jeremiah Ndlovu, Lebo Mashile, Antonio David Lyons, Leleti Khumalo, Kgomotso Seitshohlo, Lerato Mokgotho, Mosa Kaiser, Mathabo Pieterson
Directors:
Terry George
Writers:
Keir Pearson, Terry George
Studio:
Entertainment In Video
Genres:
British Films, Drama
Countries:
UK

You wouldn't expect a film depicting clearly the genocide in Rwanda to leave such a good impression - but it certainly did for me, despite my being totally averse to any gratuitous violence. This film was an accurate, and extremely well acted and filmed recreation of the moving story of a man of conscience and faith who saved over a thousand refugees, at great risk to his own life. It shows clearly the unwillinglness of the West to take any action to protect the innocent, despite airlifting troops in to rescue whites. To me it was a damning inditement of the lack of concern for the innocent victims, which we can see being repeated again in places like Darfur. The music is great, and the human interaction keeps you involved right up to the last minute - and without giving too much away, I do like happy endings!

i was really griped with the story which as you get into the movie is very heartbreaking watchin the things that really did happen in rwanda.

Totally gripping throughout. Excellent acting depicts the struggle to survive appalling circumstances, whilst the story itself is clearly told. I found it genuinely frightening.

For some of us that were fortunate not to remember this event it should be seen to be beleived what attrocities were commited at this time in our history and to see that these people were left on their own when no-one else would help.

Also the sacrifices people made to help each other.

Remarkable film great acting not to be missed.

Excellent film. Gave you some idea of the terror of the Rwandan war and how Europeans had caused the divisions between the Rwandans.

This is an excellent film- slightly spoilt by hollywood demands for romantic subplots etc. Superb acting. perhaps i should watch this movie again when i feel more open to scenes of endless horror and barbarism...

really well made though so i would recommend it

Best film I've seen for a while - one that really stays with you. Made me cry (I'm a girl).

While a million people are slaughtered during the tribal wars of 1994, one man keeps Tutsis alive by offering shelter within the grounds of his luxury tourist hotel. Humbling and convincing depiction of an encroaching horror indicts us all for our indifference. Wonderful performance by Don Cheadle as this extraordinary man.

Not a patch on the likes of The Killing Fields, which dealt much more effectively with depicting the turmoil, despair and moments of hope in a far more convincing manner. Hotel Rwanda shied away from making a compelling film and glossed over much. The end result is standard Hollywood fodder. Avoid.

To view the brutality of the Rwandan civil war from the point of view of a hotel manager is an unusual choice. I imagine that this manager was so philanthropic as to inspire an indebted person to write about his triumph through adversity. Some of it is incredibly selfless almost unbelievably, and some is romantic slush which seems to be an inevitable Hollywood add-in, some of the acting is unconvincing but ultimately it is a huge guilt trip to most of us who do nothing about anything, no matter how awful, unless it affects us directly. It is unfortunately as much a part of human nature as hating someone for a petty (and not even a real)difference. Recommended to explore the selfishness of the human psyche.