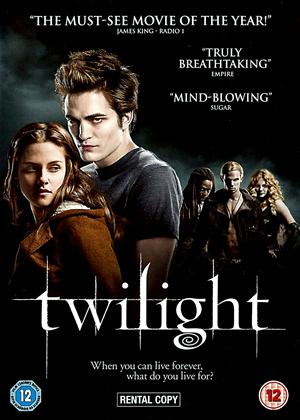 One of the most eagerly anticipated, yet overhyped and disappointing films of the year. If you think this is going to be an all action, special effects, vampire movie with bite, think again. Slow, slow, very slow, bit of action towards the end, then slow and meaningless. This is trying very hard to be deep and meaningful, but the script is poor, the plot has no depth to it at all, and it's all in the end very dull and predictable. Imagine a bunch of pasty faced skinny teenagers with white face powder, red lipstick and black eyeliner in American grunge clothing and you have what are supposed to be vampires. Lonely girl moves to new town, fancies a guy who turns out to be a vampire, he only eats animals not humans and has a family of similarly pasty faced vampires who live in a big modern condo in the country. Along come another gang of vampires, one of whom wants to eat said teenage girl, stage five minute fight between vampires at end and that's it, the entire plot! The acting is poor, the special effects minimal, zero plot, dull script, not even very good camera work or editing. This is really a made for TV movie in the vein, no pun intended, of buffy or charmed or any other gothic style USA TV series. The writer appears to be trying to inject a bit of Mary Shelly or Bram Stoker into this, but unlike these gothic giants, this story is weak, poor and flimsy.

An unconditional love story between a human and a vampire. The humour is fantastic. The passion second to none. I think everyone would like this. Can't wait until the sequel.

Thoroughly enjoyed this film. Have read the four books in the series and hope that a film is made of all of them.

Before embarking on Twilight I had visions of an Emo flavoured Buffy adventure for a new generation. In this regard Twilight is surprising as it passed my expectations. Its all clearly signposted and as with many franchises the first film is laying down the context for others to follow. However the characters are interesting and the cast well selected. As events unfold its hard not to get swept up in events which are well executed and nicely directed. Twilight is better than many of the blockbusters I've seen recently.

What nice teeth you have - Twilight review by CP Customer

Good to see the bullies get sorted by the superhuman powers of the the lead man.