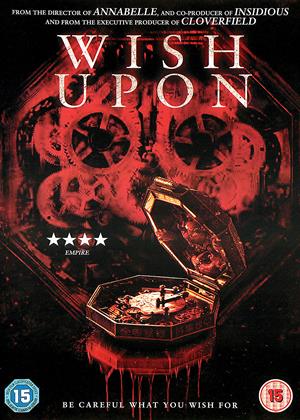 Reviews (2) of Wish Upon

Wishes in a Box - Wish Upon review by porky

Not bad , Entertaining enough movie, Wishes ending with Deaths is a pretty well known and often told tale .The Monkeys Paw being the most famous .

This one is not exceptional in any way ,but like any Good Horror the pace keeps up with a death every 10 to 15 mins so it doesn't get Boring ,just a bit samey . This seemed a mix between Monkeys Paw and Final Destination in the way the Deaths took place.

Over all ,not a bad movie to sit down with, dont expect too much but it certainly didnt disappoint. well worth a watch .

Dark surprises right until the end - Wish Upon review by NP

I liked this undemanding horror film. It isn’t going to reinvent the concept of fear, but it doesn’t try to. The bratty kids we are supposed to dislike are thoroughly dislikeable, and equally, the good guys are appealing enough for us to enjoy spending time with.

The idea of a Chinese wish box is a good one, but it does seem to take Clare (Joey King) an awfully long time to realise that a Chinese wish box … grants wishes. However, there’s a price to pay, and this results in some of the few gory scenes ‘Wish Upon’ has to offer (including one truly wince-inducing episode involving a sink’s rubbish dispenser).

It keeps you guessing what is going to happen right until the final frame. It’s a twist so effective, you won’t get any spoilers form me. 8 out of 10.

Wish Upon is a film so earnestly terrible I almost thought it was a joke of a movie, intentionally aiming to be this laughably bad. It has the familiar stench of a Twilight Zone episode retooled and recast for a tween audience by a team of executives that knows nothing about teens outside of some market data. It’d have to be. How can you make a film where a bunch of hashtag spouting teen girls are turned on by Ryan Phillippe playing saxophone?

The plot is simple enough to be a solid premise if only it weren’t filled with dopey and despicable character to keep it going. Claire (Joey King) is the unfortunate teenager in need of some wishes. Her mother committed suicide during her childhood, her dad is a trash-digging mess, her house is in poor condition, her clothes old and her high school social status is low. Into her life comes a Chinese box that will grant her seven wishes. With each wish, the box claims a soul in proximity of Claire, killing the victim Final Destination style. When the seven souls are all used up, the demon of the box will take your soul to hell. Claire doesn’t know these rules when she unwittingly makes her first wish, but will still make immoral and awful decisions when she learns about the mysteries of the box.

Her first wish is for the popular girl at school to rot. The next morning, Claire’s elitist bully is horrified to discover her skin has turned back and is rotting away. It sounds horrible, but not to Claire and her friends. When they hear their nemesis is currently in the hospital and may have limbs amputated for her condition, their natural reaction is to laugh and give the finger to the girl’s friends asking for a donation to help her out. I can’t buy that teenagers are this cruel. Maybe they are, but those are the ones I don’t ever want to know.

Claire’s later wishes don’t become as lethal, but far more selfish with laughably terrible writing. She wishes to be rich and live in a nice house, leading to a painfully drawn out montage of shopping and selfies. Does she deserve this scene for having endured popular rich kids throwing drinks at her in school? Not when it comes at the cost of another human life. But who cares? Certainly not Claire who continues to make the most ridiculous of wishes to be popular and acquire the cute boy at school she thought she’d never had a chance with.

While Claire’s actions are hilariously despicable towards the end of the film, it’s amazing how lazy this film is with such a concept. When she wishes to be popular at school, there’s no special event that is staged to make her popularity seem natural; she’s just automatically popular without any explanation. The deaths caused by Claire’s wishes are also just as silly, as with one victim who willingly places their fingers into a garbage disposal not once but twice. I’m not so sure these deaths were caused by the box as they might just be coincidences.

Part of what makes a movie about a curse so engaging and exciting is that we care about the individual afflicted with the curse, hoping they’ll survive another day or learn some lesson in the end. None of that is here. Claire begins as a doltish teen of questionable morals and will end up being a jerk with even more immorality. By the time Claire joins in with her friends at cackling at the grizzly misfortune of others, I didn’t care about any of her plights. I didn’t care if she’d keep her friends, get the guy, become popular, come to terms with her dead mother or escape the curse of the box. And the twist of a loophole she tries to exploit in the picture tries to present the unfortunate ending as a twist, even though anyone with half a brain cell could see it coming a mile away. Good twists for curses come when there’s a wildcard element, not when the cursed individual can’t figure out simple logic.

While I appreciated how unapologetically and unintentionally laughable this teen horror turned out to be, it still has a derivative nature that slows down its insanity, plucked from at least a dozen or so Twilight Zone episodes. When I wasn’t doing my best to hold in all my snickers, I was sighing as I waited for the next death or predictable development.

Here are the seven wishes the studio executives should have made.

2. Write teenagers that sound more like teenagers and not what the magazines or commercially-produced YouTube videos describe as teen talk.

3. Make Claire a more relatable character and not a conniving witch that makes the audience cheer for her demise.

5. Stage better deaths that feel more like accidents and not just cartoonish setups for another scratch on the wall.

6. Get rid of that zombie-shooting smartphone game the high school students are playing. Seriously, it’s lame.

7. Hire Denis Villeneuve to direct because he’s the only one who could save such a poor excuse for a film.