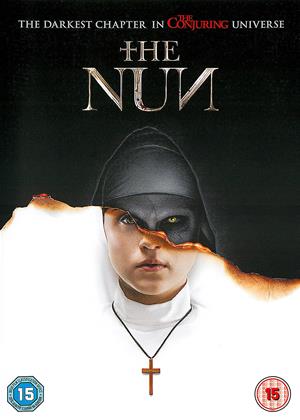 Looking for Scares ...there were NUN - The Nun review by porky

The Conjuring set this up to be Super Scary and Creepy with the appearance of the painting of the Nun and how it Badly effected the Main Character and Ghost Hunter in the first 2 Movies ,but in reality it is the run of the mill Convent Ghost story.Nothing special and certainly not the Horror Movie of the year .

The Horrifying Nun was Sadly Underused with a Tired story about Gateways to Hell etc...yadda Yadda yadda ....heard it all before .

Entertaining but unlike the rest of the Conjuring movies, I wouldn't watch it a second time, just not interesting enough .

Interesting only for the Beginning and Ending Tie in sequences taken from the original Movie to link them together .

There is no waiting around in this refreshing gothic horror offering, for moments of horror are on display very effectively as soon as the 93 minute running time begins. The visuals are also stunning from the offset – I am put in mind of the faux-European feel of Hammer films, but with a massively increased budget.

A priest is sent by the Vatican to investigate the suicide of a young Nun from a Romanian abbey, and uncovers a demonic power. The power has some connections with ‘The Conjuring (2013)’ and its burgeoning franchise. Luckily, however, you don’t have to be familiar with that series of films to understand much of what goes on here.

I would say that the film as a whole is solid rather than spectacular, interesting rather than essential. It does, however, contain some memorable set-pieces (including a very uncomfortable scene of someone being buried alive), some nicely shot moments and a good air of unholy evil courtesy of Director Corin Hardy.

Demián Bichir plays Father Burke, Taissa Farmiga is Sister Irene, Jonas Bloquet is Maurice "Frenchie" Theriault and Bonnie Aarons is The Nun – the acting is uniformly impressive and is never reduced to second place behind the myriad of horror effects.

I don't really like anything too disturbing but for some reason I wanted to give this a try, I did like the characters and loved the music and setting, I found it to be very entertaining and well made, the music is fantastic and really dramatic.

This film was so so, but doesn't for me have anything unique to the horror genre. I saw The film Annabelle The Origins before which was more enjoyable. The sheer horror of Antony La Paglia's double grief was an additional character to that story line. The acting wasn't bad by anyone, it's just too familiar. If it had been a tribute film to the classic horror it might have been more well received.

There were many nods to traditional horror aspects; the ringing of bells to alert a passer by that the recently buried was not dead. The classic Gothic castle/ convent with many secret door ways. The Latin inscriptions which were to me such a cliché. Was Latin even spoken by all The Crusaders? Only educated people (rich) knew the language. The creaky doors and the repetition of the nun painting from Conjuring 2 was nice.

Part of me I'm sorry, from the opening sequence questioned the actions of Sister Victoria. Suicide is a very difficult and personal thing for a person, but after all the warnings from Sister Jessica she should of jumped earlier. There's no point looking at the approaching ghoul, take pre-empting actions. It's like people watching a the invasion in Independence Day film. You don't watch it you run. I know that the film would happen if she did but by explaining The Nun's origin made the film to me a bit flat. There were some genuine scary visuals but I didn't have any benefit from the jump scares. It must be because I've been watching Terminator, horror from 9. I did like the explanation of Maurice's new white tattoo which was again tying up all the threads of the franchise.

I don't mind the Blumhouse horror brand but The Nun has to be the worst I've seen by some distance. Repetitive jumpscares, bad characterisation and a predictable plot make The Nun a bit of a dud. The CGI is OTT and the scares non-existant - other films in The Conjuring universe of related movies are a lot better than this one. It's a struggle to get through - I felt sorry for the French guy called 'Frenchie' - you will have seen more realistic French people on Allo Allo - all he had missing was a beret, a Pepe Le Pew moustache and a string of onions around his neck. Shame, as the trailer was intriguing.

Stop me if you’ve heard this one before. A Catholic priest and a nun walk into a haunted church. Some spooky things happen and then they stop a demon that smacks them around a bit. It’s a joke that sounds a smidge funnier in context with The Nun, a Conjuring spin-off that diverges down paths of goofy jumpscare horror and confounding adventure movie territory. And, wow, is that Conjuring playbook getting dusty this time around.

It’s 1952 and the Vatican is in need of a rebellious duo to investigate a suicide at a Romanian church. Father Burke (Demián Bichir) is a priest that had previously performed an exorcism on a kid, but the disastrous result led him to drown his sorrows in crossword puzzles. Sister Irene (Taissa Farmiga) is a nun in training, the bad girl of her convent, but only because she tells tales of dinosaurs to the kids and doesn’t wear the habit that often. But she has a familiarity with the Romanian area so she’s just the pre-vow woman for the job. Together, along with local French-Canadian Frenchie (Jonas Bloquet), they’ll solve the mystery of the nun that hung herself. Unlike Scooby Doo, there’s a real demon behind this, sometimes with teeth and ghastly white skin.

The plot requires our characters to be extra gullible to pull off its haunted church angle. You know the drill: there’s something scary in the darkness and our heroes must walk slowly towards it, an arm outstretched. They’re so gullible for these tricks that at one point Father Burke will be led by a bell on a string. Now, I don’t mind so much that these characters are so dumb to stumble into these traps; I just thought I’d point that out. Their actions are excusable if the frights they’re blindly speeding towards are worth the stupidly. And it’s unfortunate that The Nun offers little variety. You’ll get your jumpscares and maybe a clever use of shadows, repeated from The Conjuring 2’s scariest scene with the nun painting, but the majority of the scares follow the same formula: something spooky is in the distance, turn away, turn back, it’s gone. I hope you like these types of terrors because it’s all you’re going to get for most of the movie.

So bereft of creative horror that by the third act the movie nearly abandons the genre altogether for an adventure movie. When the book ended character of Frenchie pops back up as the comical action hero, there’s an Indiana Jones style raiding afoot. Consider how the film shifts from trying to decipher the evil demon targeting nuns to traveling through underground tombs with torches to search for a relic containing the blood of Christ. It’s no wonder why Frenchie ditched the church for most of the movie. He belongs in an adventure picture and only pops up when something more his style comes to pass in this middling horror picture.

While The Nun ultimately disappoints in the fun department of its Conjuring predecessors, it has its small, almost microscopic moments of haunted house glee. The camera takes some interesting turns with pulling away, racing with the characters, and tilting deep as the demons start coming out to terrorize. There’s some unique staging of the church, even if it grows a little cliche with a spooky graveyard of many grosses and heavy mist. And it’s certainly a pleasing picture to watch with an audience that overreacts and freaks out to every scare. But when the most entertaining part of a horror movie is listening to someone in the audience cuss in a state of fear at the screen, there’s something missing in this horror franchise that is starting to get a little long in the creepy, demonic tooth.