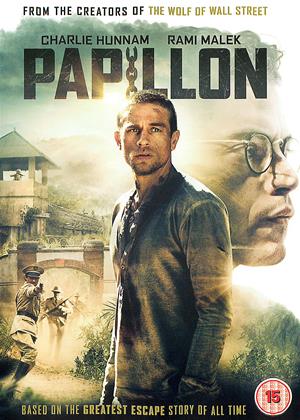 Good watch - Papillon review by AS

If you remember the first Papillon movie with Steve McQueen and Dustin Hoffmann in the 2 main roles, you may not bother watching this version. But DO bother! This is a far more gritty movie, and the back story is given more prominence. Like the first version though, this is well condensed down from the book. To be fair though, you'd need a 4hr marathon to even get close to all of the events in the book! This is well paced and if you're a fan of gritty 'realism' you'll like this movie.

This is a fairly interesting film that held my attention throughout. Acting is solid and the story is engaging. It's worth adding to your list.

The latest adaptation of the stirringly dangerous and depressing tale of the real-life French convict Henri Charrière comes with a heftier dose of updated grit and fierceness, in addition to glorious cinematography. Though the 1973 film does a solid job at portraying the harshness the Devil’s Island penal colony, director Michael Noer gives Charrière’s autobiographies a good glaze of the rawness without much melodrama.

Charlie Hunnam is certainly in his element when portraying the tattooed and tough Charrière, who soon finds himself going from a safecracker of the Persian underworld to a man falsely accused of murder. Quickly found guilty, he is hauled off to the Devil's Island in French Guiana. The prison colony is a hellish experience. Prisoners are forced into labor on an island with no escape. Those who fight back are handled simply with the guillotine, the head sliced off for all the prisoners to see and the prisoners to bury. And as if it weren’t hard enough to deal with strict labor and no way out, Charrière also has to deal with deceptive and violent prisoners, eager to sell him out for escaping or gut him when he’s most vulnerable.

Sticking with Charrière throughout his sentence is counterfeiter Louis Dega, played by a charming and quirky Rami Malek. He’s smart enough to know he needs a strong enough guy like Charrière around if he hopes to not only escape but also survive. Louis learns as much when he is awakened by the man next to him having is throat slit open and his wallet stolen in his sleep, only for Charrière to kick the snot out of the murderer not long after.

Both Hunnam and Malek shine in these roles of men most desperate, terrified, and determined. We can identify with them enough when conspiring their escape and feel for them when pushed back time and time again with every unsuccessful flee. Even if you’re familiar with Charrière’s autobiography and know the events that will transpire, there’s a sense of urgency and humanity to the situation. Any scene the two occupy is brilliant.

Where the film does falter slightly is in the portrayal of the madness that Charrière experienced for his many months of isolation and malnutrition. He naturally starts to lose his mind and starts experiencing strange visions of life on the outside with a surreal tone. This aspect I always find seems to be the most difficult when it comes to portraying prison films and it’s unfortunate that the film takes the easy route of flashbacks and dreams that seem more standard than empathetic.

That being said, the film itself is a beautiful sight for being so beautiful. The cinematography of penal colony feels large, old, and alive with muddy land, towering walls, and gorgeous views. One of the most excellent scenes of darkness and despair occurs when Hunnam witnesses the first public execution of a prisoner. The brief shots of the blade coming down, the blood draining, and a mere glimpse of the head in the basket make the terror real and discomforting. Charrière comes to realize the seriousness of maintaining focus when he later has to move the body with Louis, remarking that they’re no longer holding a man but flesh and bone.

Papillon boasts a lot of strong talents to serve a respectful and impactful take on Charrière. Providing not only a solid prison film of real emotion and gravity, the addition of showcasing the real Charrière in the film’s obligatory epilogue of true events makes the film resonate all the more effective. And while it’s no surprise to see Malek pull in another strong performance, it’s impressive to see Hunnam is roles best suited for his bolder and brawnier instincts.