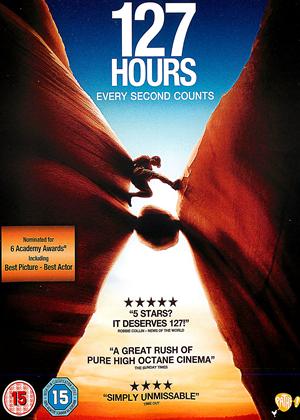 Wow. The best film I have seen in the last year. It tells the true story of Aron Ralston (played in a remarkable performance by James Franco), who went on a solo exploring weekend among the canyons of Utah, became trapped by a fallen boulder, cut off his own arm to escape, and lived to tell the tale. And no, that isn't a spoiler – the story is well known.

So how can you make an engrossing film about that, where most of the time is spent trapped and almost immobile? It takes the directing skill of Danny Boyle ('Shallow Grave', 'Trainspotting', 'The Beach', '28 Days Later', 'Millions', 'Slumdog Millionaire') to give it life. And it succeeds by never letting your interest fail, filling the screen with initial action, then with flashbacks of Aron's life and regrets, with his hopes of life and of escape, then his bitter realisation of what he must do, then with a finale which is both uplifting and optimistic for the future. Superb – 5/5 stars. Highly recommended.

Off the beaten Track. - 127 Hours review by Steve

True story following the desperate measures taken to survive by a climber, trapped under a rock in a crevice for five days. Flashback, hallucination and visceral recreation of his ordeal takes us through the 127 hours; his release is a vicarious spiritual exultation (partly thanks to Sigur Ros). James Franco's solo rendition is superb.

Real but got distracted - 127 Hours review by CP Customer

This film gets you because its a very accurate account of the situation and you totally empathise, however I did get a bit distracted, Personal choice I guess however I would recommend this film

In his follow up to critical hit Slumdog Millionaire Danny Boyle choose to work again with three men he knew could help him make a star picture; the film was co-written by Simon Beufoy, co-produced by Christian Colson and the music was scored by A. R Rahman; once again these four men have combined to make a truly inspirational movie.

127 Hours tells the true story of rock climber and hiker Aron Ralston, who on April 26th 2003 became trapped in a crease whilst exploring Utah’s Canyon land National Park. Ralston, played by James Franco, finds his hand trapped beneath a boulder that he alone is unable to shift, it looks as though this marks the end of Ralston.

From here the film becomes a series of dreams, delusions, personal epiphanies and heart felt farewells into the small digital camera Ralston had with him.

He begins by noting the time.

The film was marked as a story of survival, but what the audience is in fact treated to is the sight of a man as he comes to terms with his slow, painful death. Ralston has rationed his water and food yet both the days and his life continue to tick over. At times the film is utterly exhausting to watch, whilst at others it is almost psychedelic in it’s depiction of the lusts and wonders of life. Franco’s performance as a man unwinding is excellent, as all the aspects of personality and opinion disappear and all that is left is raw, undiluted humanity.

The film dances an interesting line between realism and metaphor, where Ralston’s physical situation mirrors his social and emotional situation, where he avoids his family and alienates his lovers. Yet whilst trapped in the canyon he comes to realise how precious these relationships truly are.

As Ralston finds himself facing the fifth day trapped in the canyon he makes the decision to sever his arm completely, having discovered that chipping at the boulder in order to release his hand was fruitless. This scene is more painful than many a horror film and Boyle is relentless in his realism and the graphic detail of the amputation. It is enough to make you cringe with disgust and tense with hope for Ralston, the man who was so desperate to live. One-hindered and twenty-seven hours later Ralston finds himself out of the canyon, walking alone for miles, until he comes across a family out on a day hiking; a wealth of faces for this starved and lonesome man.