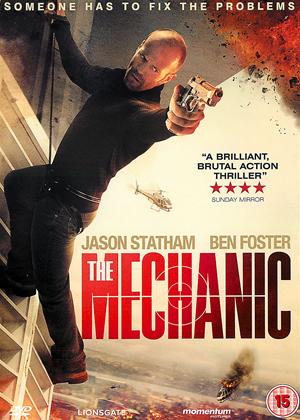 Reviews (2) of The Mechanic

An ok, if not average action outing for Jason. I found this quite enjoyable but had problems with the sound as stated below. For a modern action movie this had all the right enjoyable ingredients. Plenty of action and enough of a plot to make it enjoyable. The fast paced action sequences however have been edited in that much hated chop chop fast sequence style that seems so popular in recent years, so fast that you don't actually see anything, so what should be a fast paced and enjoyable edge of the seat action sequence, becomes dull and boring because you just can't process what's going on!

There is a serious issue with the sound on this DVD. Whilst the volume level of sound plays as normal for the Trailers and Special Features sections. The volume level on the actual film itself is so low as to be virtually inaudible. I had to wire my DVD player up to the Amp of my Hi-Fi system then listen through headphones and even then, the volume was low. So the volume level of sound on the film is presumably faulty, as I see no valid reason why the volume should be ok on the Trailers and Special Features but almost inaudible on the film itself! I had to use the subtitles to watch this film.

Warning spoilers: Typical style Statham movie, he's a contract hit man working for a undercover company basically run by 2 men one (played by Sutherland) a long time friend but evidence comes to light that incriminates him of misdealings and a sting which gets 5 men killed in a Cape Town contract. Statham is ordered to kill him...and yes this is where no sense comes into the film, without no thought or even asking his wheelchair bound friend what happened he kills him. There on the film jumps form sillyness to sillyness as Bishop (Statham) takes his dead friends son (who he's just bumped off) under his wing even though he's an emotionless professional hitman and shows him the ropes to save him from being a drunken bum or some stupid reason, a few bodged hits later thanks to his co-assassin (played by Ben Foster) they find the truth behind what happened in Cape Town but you can see the threadbare plot a mile away. Also throw in a brief love scene with a girl/prostitute whom has nothing to do with the plot what so ever and the climax to the film is naturally over the top but not surprising. If you like Statham and his type genre film then it would be okay for a late night film but that's about it.

Simon West’s remake of the 1972 Charles Bronson flick The Mechanic is a movie obviously made for this generation’s attention span.

Jason Statham plays Arthur Bishop, a hired assassin who fancies himself a connoisseur of fine things. When one of Bishop’s hits goes awry, he finds himself with a partner, the son of the man whom he killed, Steve McKenna played by Ben Foster. Together, the two engage in murderous bromance that introduces the young one to the trade, as Bishop’s liquidating mentor played by Donald Sutherland did to him.

Although the original film could’ve used a little action upgrade, Simon West takes it a bit too far. The action and editing is so fast paced that we are unable to adequately process what’s going on.

I’m not sure who has told Hollywood that audience’s attention spans have gone the way of the dodo, but we still wish for a shot to linger on screen long enough to process it. The film seems to be shooting at 24 scenes per second rather than 24 frames per second.

Contrary to popular belief, Statham isn’t a terrible actor; he’s just allowing himself to be typecast into roles that don’t challenge him. He’s a wonderful action star, but I’m sure he could be used for dramatic purposes if only the role would allow him. In The Mechanic, most of the drama falls to Sutherland’s character who gives the film more depth than it deserves.

The film’s characters just aren’t fleshed out enough to hold the audience’s interest, which is ironic when you consider the earlier paragraph. Hollywood just doesn't seem to understand that our attention span is based on characters we care about and not just how fast things move.