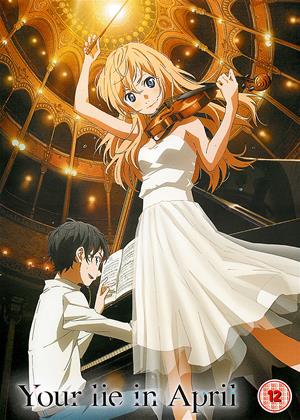 Rent other films like Your Lie in April: Part 2

Not released
Voices of a Distant Star

Reviews of Your Lie in April: Part 2

You Lie in April: Part 2 is an emotional tear-jerker that never forces neither the romantic, nor the emotional aspect of the film; rather, it all comes naturally and seems as genuine as an animated Japanese series can feel. And so, Your Lie in April is constantly keeping you on the verge of an anxiety breakdown, so that you’d constantly guess what would happen next (which comes off as a good thing). To this extent, the series is worth to consider adding on your repertoire – even if you’re not so fond of romanticized teen dramas full stop.

Your Lie in April follows piano prodigy Aima Kosei (voiced by the ever-so talented Natsuki Hanae) who finds himself amidst a personal tragedy and refuses to continue with his craft any longer. And therein lays the true emotional resonance of the series, mainly revolving around the struggles of Aima to accept, or rather – find his true identity and define himself against the external conflicts of the world. Soon, as Aima Kosei meets an equally talented violinist Kaori Miyavano (voiced by Risa Taneda), his life turns upside-down as the unlikely duo engage in genuine romantic antics typical for teens of their age.

From here thereon, the story fixates on Aima and Kaori’s togetherness, but in a way that never happens to overshadow their previous character developments (including their overarching stories). And while Kaori consoles Aima to come in terms with his inner demons (note: there are no actual demons in this anime) – she too finds herself struggling against the hardships of everyday living. It doesn’t matter if these characters are animated: they exhibit real traits not seen in most modern cinema (life-action) nowadays.

Next up: the music. Given Your Lie in April’s main characters are a reluctant pianist and a brilliant violinist, the soundtrack has to be above average in order to work. And boy, do the sounds deliver. And make no mistake, the music is not the main focus of the series: in fact, it’s far from it. Your Lie in April puts the story forward, while the music only serves to accompany this great achievement in both visuals and sound.

As it nears its end, the romance part gets ever more suspenseful and even nihilistic at times. This isn’t to say that Your Lie in April is pessimistic, but the opposite: it gives you hope, fills you with bittersweet sadness, and evokes some parts of your body that you never thought you had before. And you will cry, that’s much I can say for sure.

Finally, Your Lie in April: Part 2 features some of the best romances ever put to screen, and is a true staple in the rising significance of animated features regardless of genre. See it now, or regret it forever.