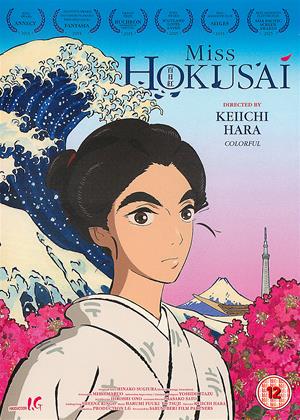 Moving Japanese anime telling the story of the great artist through his daughters and entourage. The storytelling is bound together through various stories behind his more famous paintings and all in all it is an accomplished moving example of current anime with a lovely soundtrack.

This is a story of a great artist and his family, set in Japan in the early part of the nineteenth century. It's beautifully made and the even the smallest details are exquisitely drawn, adding to the depth of the scenes. Well worth seeing; I loved it.

Beautiful and poignant, Miss Hokusai splits storytelling conventions by subverting pre-existing animation norms into something extraordinary – both for the eyes and the mind. The charming hand-drawn characters are not exempt of this rule-defying characterization, since they feel as real as a cartoon character, in all sense of the word, can ultimately be.

Miss Hokusai doesn’t follow what’s broadly popular these days among moviegoers: a rehash of the olden myths where a (given) protagonist has a weakness, receives “power-ups” during his quest, becomes more powerful as he goes and ultimately defeats his opponent – therefore overcoming his fatal flaw and saving the “village” from destruction. Instead, Miss Hokusai lacks (not to say that it’s bad) a conventional narrative flow and substitutes the aforementioned with the life before the Meiji Restoration of Tokyo in 1867, then known as Edo.

Since this is a biography, life in Edo, although romanticized, nevertheless shows real people living their real lives. This is hard to accomplish in storytelling, especially an animated one – so kudos to director Keiichi Hara for managing to do just that.

Now, the story focuses on author Hokusai, best known for painting ‘The Great Wave off Kanagawa’, which is perhaps Japan’s most known artwork to this day. Hokusai lives together with his daughter O-Ei, in a place stricken by poverty and unpleasant living conditions. Their only obsession is producing paintings – the driving force which stops them from giving up on life altogether. Meanwhile, his wife and other daughter who is blind, live separately from Hokusai somewhere else.

The main story is told through short segments closely intertwined with Hokusai’s best works, while the film hints that some of them were maybe painted by his older daughter. Whether this is true or not becomes a deal of speculative history, and this is where the movie really shines.

In continuation, one witnesses mystical revelations, like that of a geisha whose vision of O-Ei’s paintings causes her astral projections during late hours. This comes true for a boat ride in which, and this is where the movie speculates, the great wave painting was being made. Other motifs include love and death, told separately through O-Ei’s unreturned feelings toward a pupil of his father’s, and Hokusai’s younger daughter final departure.

In Miss Hokusai, the unconventional plot structure is mostly prominent via vignettes that feel as if they were scattered throughout the movie without logical connections to bind them together. This is simply not true, for the animated feature is really set to mimic Hokusai’s scattered life who he personally perceived as countless fragments, which more often than not, don’t hold any higher value or meaning to follow along.

Miss Hokusai is a great piece of quiet storytelling, that in a world of excessive loudness and attacks of the senses - everyone should gather the courage to appreciate for what it is.