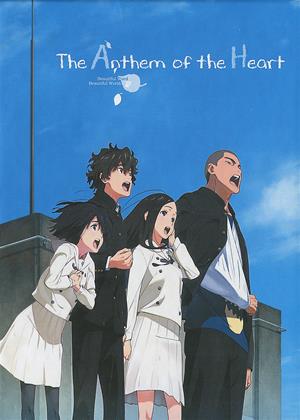 Synopsis:
Jun is a girl whose words have been sealed away. She was once a very happy girl, but because of a "certain thing" she said when she was very young, her family was torn apart. Then, the egg fairy appeared in front of her and sealed away her ability to talk in order to stop her from hurting anybody else. Since this traumatic experience, Jun lives in the shadows away from the limelight. Years later - she is nominated to become an executive member of the 'community outreach council'. On top of that, Jun is also appointed to play the main lead in their musical...
Directors:
Tatsuyuki Nagai
Producers:
Narumi Kabe
Voiced By:
Inori Minase, Koki Uchiyama, Sora Amamiya, Yoshimasa Hosoya, Taishi Murata, Rie Takahashi, Shizuka Ishigami, Takanori Ohyama, Makoto Furukawa, Keiji Fujiwara, Yô Yoshida, Eizou Tsuda, Kiyoko Miyazawa, Hirofumi Nojima, Kengo Kawanishi, Junichi Yanagita, Ayaka Suwa, Hiromichi Tezuka, Mariko Higashiuchi, Ikumi Hayama
Writers:
Mari Okada
Aka:
Kokoro ga sakebitagatterunda.
Studio:
Anime Ltd
Genres:
Anime & Animation
Countries:
Japan, Anime & Animation

Rent other films like The Anthem of the Heart

Reviews of The Anthem of the Heart

The Anthem of the Heart (aka Kokoro ga sakebitagatterunda.) review by Adrijan Arsovski - Cinema Paradiso

The Anthem of the Heart is a beautiful, tangibly emotional piece of cinema brilliance that ends not with a bang, but with a whimper. Yes, this trinket of animated storytelling starts poignantly enough so that it captures your attention all throughout its very end, where it falls flat on its face. Come to think of it, this is neither a grave error – nor a plausibility mistake, but rather (I’m guessing) a deliberate narrative conundrum that doesn’t work as well as director Tatsuyuki Nagai and screenwriter Mari Okada had both envisioned.

The film starts with a fairytale-like vibe but still stains deeply ingrained in the harsh reality that surrounds a given life, constantly meandering between the figurative and the real. In fact, The Anthem of the Heart provides a striking balance between cheerful, happy-go-lucky moments and dark, heavy segments that would leave no one indifferent. Truly still, it grows to become a tad bit clichéd towards the end – breaking the wide-held illusion that animated features from Japan can’t do any wrong.

In it, Jun is a girl who is galvanized into thinking that a love hotel at the top of a certain hill is a castle, and her dad is a prince. She comes to this conclusion after seeing her father drive towards what she thinks is the castle, with an unfamiliar lady together in the backseat. Surely enough, Jun tells this story to her mother, after which her parents separate and her father puts the entire blame on Jun. Devastated and heartbroken, Jun wanders off into an unknown direction, and as all fairytales go, encounters a magical egg. Previously, she swore to never hurt anyone with her words again, so the egg takes her ability to speak (in an excellent irony present in the majority of folklore and fairytale storytelling).

Ten years after, we see June how she’s still plagued by the egg’s curse. Her teacher gives her and three other students an assignment involving a community outreach in the local area, and Jun profoundly refuses (of course, experiencing a difficulty to verbally express herself). Which brings us to the film’s main point: although the curse is wrapped around a fantastical cocoon, it feels very much real and can be interpreted as Jun’s rationalization in light of her parent’s divorce. It’s more than evident that she suffers, and the fantasy built around it is only there to escalate the emotions even further.

Then, Jun meets a boy and starts to see the importance of expressing oneself, not necessarily through speaking, but visually and emotionally as well. From this point onward, the film starts to sail into safe territory, leaving the much desired cathartic release in the minds of the audience. Which kind of sucks, since The Anthem of the Heart started off with a great potential for a tragic escapade that got distilled down to a pulp. Nevertheless, this doesn’t dissolve the fact that The Anthem of the Heart is an emotional, well-crafted experience that touches deeply down and reminds us of the power of words while doing it.