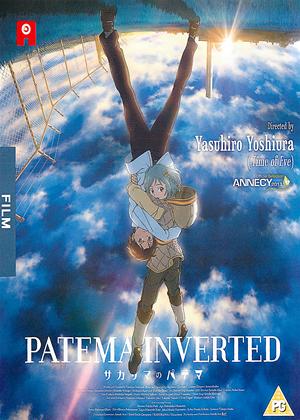 Synopsis:
Patema has lived her whole life underground. Following a catastrophic attempt to harness alternative power sources, her community were driven to settle in a dark, cramped network of tunnels below ground. She roams them by torchlight, dreaming of adventures on the surface. Age does not fit in comfortably in school or society as a whole. The world he lives in is known as 'Aiga', controlled by the tyrant Izamura's family for generations. Together - the pair are about to be pulled into something much bigger that will turn their worlds upside down...
Directors:
Yasuhiro Yoshiura
Producers:
Michiru Ohshima, Mikio Ono
Voiced By:
Olivia Charles, Robbie Daymond, Marc Diraison, Richard Epcar, Bill Lader, Cassandra Morris, Chris Niosi, Wayne Grayson, Bill Rogers, Patrick Seitz, Stephanie Sheh, Michael Sinterniklaas, Yukiyo Fujii, Nobuhiko Okamoto, Shintarô Oohata, Shinya Fukumatsu, Masayuki Katô, Hiroki Yasumoto, Maaya Uchida, Takaya Hashi
Writers:
Yasuhiro Yoshiura
Aka:
Sakasama no Patema
Studio:
Anime Limited
Genres:
Anime & Animation
Countries:
Japan, Anime & Animation

Sign up
Lupin the 3rd: The Secret of Mamo

Patema Inverted is a display of a beautiful and creative Japanese anime film, and yet I still found it difficult to understand. Unable to properly relate to the characters and story definitely separated me from the created world, but I still give it three out of five stars for being so stunning in design.

The film begins in the near future, where experiments are being done to harness the Earth’s gravity for energy. But as can be expected, things don’t go quite according to plan. The experiments backfire, causing nearly everyone - and everything - to be thrust into a reverse gravity field. Time has now past, and we are introduced to Patema, a teenage girl who stumbles out of her world and into the ‘upside down’ world. She meets Age, a teenage boy, and the two grow close, despite their gravitational differences.

This film took an interesting approach to the idea of a relationship with people coming from ‘different worlds’. At times, the characters (both main and antagonist) are cliche, playing the typical two-dimensional roles. As I said before, I found this film difficult to understand. This was not about the story - which was told in a linear fashion - but the science-fiction ideas. The ending also wasn’t quite as expected, giving less of an impact than the story had so far accomplished.

Not knowing the voice cast (either Japanese or English), it is difficult to fully judge their performances, however I have no complaints in that area.

As has been brought-up many times by audience members and critics, this film has striking resemblances to the 2012 Canadian-French film Upside Down. I am not sure which came first (as Patema Inverted would have taken longer to create due to its animation-style), but it is interesting to see how people think the future might be. Years ago, ideas for the future involved flying cars and almost utopia. These days, ideas for the future aren’t so optimistic, generally falling into a post-apocalyptic setting either by natural disaster, or - more often - human creation.

Online and in-print critics and audience reviews have been quite positive - mostly either focusing on the story, or the visuals.

This film is definitely not for all audiences, with the story too complex for young and old viewers. For those that are interested in this sort of film, I would definitely recommend it, as the visuals alone will take you into another world. I give it three out of five stars, and think the film could have benefitted from being simpler.