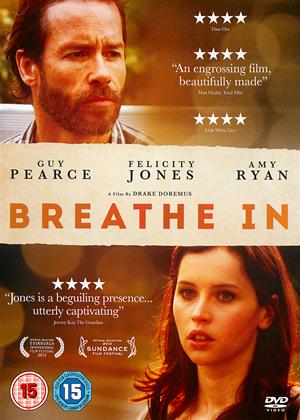 Reviews (2) of Breathe In

Predictable and unlikable characters - Breathe In review by FT

Although the acting is good, the characters are obvious and the conclusion is expected. Most of the film is spent hoping what you think is going to happen, won't!

Waste of time and money - Breathe In review by VK

Soppy story. Too much background noise combined with unclear speech. It was a strain to hear and understand and I regret wasting my cash and time on this rubbish.

When Drake Doremus, the director of last years hopelessly vapid Like Crazy decided to make Breathe In, a tale with endless similarities and even some shared cast (Felicity Jones), it sounded like a mistake, a way of reliving his supposed glory from the much loved but overrated Crazy.

That being said, Breathe In is a completely different collection of thoughts and feelings. While still portrayed in Doremus’ naturalist style, everything feels more convincing, more plausible thanks to some wonderfully detailed characters and side stories used to flesh out the core cast.

The film follows what happens when British exchange student Sophie (Jones) comes to America searching for culture and inspiration. However when Sophie discovers the only person she shares any interests with is her exchange partner’s father Keith (Guy Pearce) she begins to inadvertently orbit him while his wife Megan (Amy Ryan) and daughter Lauren (MacKenzie Davis) try to make her feel more welcome, despite the problems she begins to cause.

Hopelessly unavoidable and yet undeniable spellbinding, Sophie and Keith’s journey of ultimate destruction is a masterclass in the topic of regret and its grasp on peoples lives at different ages. From Sophie’s idea that she must do what she wants to avoid it to Megan’s decision to hide it through activities and self absorbed family ideals.

As Doremus displays sentiment through music and longing glances the films plot seamlessly brings the films disparate elements together into a bigger piece like the symphonies Keith plays with such attention and devotion. Pearce makes Keith, a repulsive creation on paper, someone to pity, a man who has far too long avoided his life for the sake of his unpleasant and manipulative wife, the kind of person lying to themselves about their own happiness. The only weak element of the film is Davis whose presence in the film explains Sophie’s arrival in America but does little to enhance the central premise.

As ponderous as Breathe In gets, it’s all for a good cause as the film builds to a finale that proves if anything, utterly heartbreaking, the kind of ending you may see coming but one that may wreak you none the less.