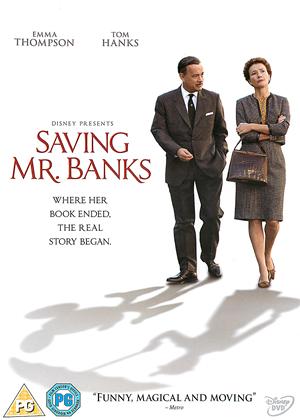 Despite its sentimentality, I found this a hugely enjoyable and interesting film. I have an interest in song writing, so loved watching the process of how the songs from Mary Poppins were written.

The script, acting, direction were all fine.

Also, unlike in many Hollywood biopics, I didn't find then flashback scenes intrusive. They added to and enriched the present day action and character, as they should.

I am not a big Tom Hanks fan, but thought he was perfectly cast here; Emma Thompson too, though she was younger that the 'real' PL Travers.

I wasn't expecting to find this so enjoyable, but found it a really touching movie. A shame it didn't win Oscars really; I enjoyed this so much more than the tedious Gravity.

Emma Thompson plays an eccentric, quintessential, exact and forthright English woman. It is done so well that it is simultaneously funny, moving and inspiring. She is for me currently the best actress of any genre. Also of note is the actress who plays her as a girl. Equally moving. Colin Farrell's portrayal is moving but he struggles with the Australian accent, he's not very good at playing a drunk either. I find it very distracting when accents are done badly, better they are not done at all. The last quarter of the film is not particularly believable but pretty sorrowful nevertheless. 5 stars, mainly for Emma T.

Detailing Walt Disney's attempts to get Mary Poppins to the big screen, Saving Mr. Banks is much more fun that it really should be. Tom Hanks is great as Walt but it is really Emma Thompson's wonderfully frosty performance as P. L. Travers which shines through. I am not too sure how much of the flashbacks are accurate, although these are interesting they do detract from the more interesting view of how Mary Poppins got made. Although offering very little in suprises, it is funny and has an emotional punch.

Enjoyed by the family, great story, well crafted to lead us from childhood to release of Mary Poppins. Fantastic soundtrack penned by talented individuals, you could really see the development of each song during the film.

Ok but not necessary - Saving Mr. Banks review by AM

This is fine. It's enjoyable, and nice, and well-played. I can imagine siting down with the family on Christmas evening and watching it.

It didn't feel necessary though. It may shed a bit of light in the upbringing of the creator of Mary Poppins, or it may imagine scenes that do her, and her parents an injustice. I can't tell, and I don't really care. I don't need to know and I don't think anyone really does. As a general rule, I always think that if you are going to re-tell a story based on real events, then it either needs to be a story worth telling or seek to show new perspectives worth thinking about . Dunkirk is a film which falls into the former category, The Post falls into the latter. I don't see why Saving Mr Banks needs to exist.

We thought the plugs for Walt Disney productions were going on for ever, so when the fim actually started we were already annoyed. The opening seemed so boring that we couldn't be bothered with the rest. If Walt Disney Productions hadn't been so keen on self-advertising we would have probably gone further. Emma Thompson played well.

If you did not know this film is based on Disney purchasing the rights to Mary Poppins in order to make the original film. While possibly not all 100% accurate it is still well worth a watch. Emma Thompson does a wonderful job of a 'prim and proper' English Author whose character frustrates to start with but then warms as the films progresses. Colin Farrell does a decent job, but holds an Australian accent like Christopher Lambert holds a Scottish one. Tom Hanks is a wonderful Walt Disney. Certain scenes and parts of this film take me back to memories of my childhood, watching the original film and visiting Disney Land for the first time. You smile when you see the dated Disney merchandise to mark the time of film. Whether you are a Disney fan or not (I am!) this film is worth watching.

Give it a miss - Saving Mr. Banks review by JP

Yes, the acting is good and the production quality high; but the film is in limbo between portraying real events believably and delivering amusing fantasy. Characters are caricatured and it's over-sentimental. Disappointing Hollywood dross.

Emma thompson is just brilliant as the buttoned-up prissy PL Travers and Tom Hanks has a lot of fun as Mr Disney. In the real story Ms Travers was not a fan of the final film and wanted nothing more to do with it so this 'insider' view is not completely on the mark but what it lacks in following the real story it more than makes up with class, laughter and a few tears.

We were very surprised that this was so good, funny and very moving. Prior to this, we had no idea of the sad family history behind the story and are glad that it has eventually been told in such a sensitive manor

Good story line, great acting, but not the best film ever. It is satisfying to watch, and you feel you haven't wasted the evening. Emma Thompson and Tom Hanks fan will enjoy, but we have seen both better displayed.

Saving Mr Banks isn’t the predictable Disney films with heroes and villains, it’s not even a friendly family drama where everything figures itself out in the end. It’s a dreary look at the effects of fathers and family and the children it has warped in the process.

Saving Mr Banks follows PL Travers (Emma Thompson), the author of the Mary Poppins series of books and her interactions with Walt DIsney (Tom Hank) when he tries to acquire the rights to her books. The two clash over the book as PL looks back to her past with her father (Colin Farrell).

PL is anything but the average Disney lead, a pit of resentment and shame trying to move past the effects of her childhood. Thompson makes you empathise with this tragic woman in a way no other actress could. She is curt but fair and makes PL caustic but relatable. Hanks adds his signature cheer to the affair as the disarmingly charming Walt Disney.

Smartly written by Sue Smith and Kelly Marcel, the dialogue is sharp and witty while never veering towards the sentimental. The flashbacks fill in much needed gaps and flesh out PL while never feeling out of place or extraneous.

Directed by The Blind SIde’s John Lee Hancock, the film’s complex tale of conflicting emotions makes for a compelling watch as the horrible nature of PL’s past comes to light as Walt tries to understand the true importance of Mary Poppins. The addition of a few choice Dick Van Dyke jokes and some musical gags make for a nice cherry on top.

The film is mature and moving in a real way, which makes a change to the fairy princesses and mythical princes propagating their movies. I’d much rather watch the idealistic ramblings of PL Travers and Walt DIsney any day as they share horror stories about their past and make iconic films as they go