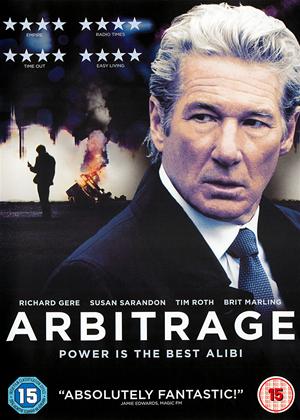 A moral tale of sorts. But it's hollow, it has no heart. - Arbitrage review by RP

I suppose this is meant to be a moral tale of sorts. But it's hollow, it has no heart.

After watching I thought to myself "so what?" - it left me unmoved and untouched. Frankly, I didn't care if the dodgy deeds and the wheeling and dealing of central character Robert Miller (Richard Gere) left him with nothing. He lost his mistress (killed in a car he was driving), his wife, his daughter, his company, his fortune (well, most of it). But he's not a sympathetic character, and he got no sympathy from me.

The film is well made and well acted with Richard Gere, Susan Sarandon and (in particular) Tim Roth all playing their roles well, but their characters operate in a world that I don't - and can't - relate to.

It's not a bad film. But I didn't enjoy it much so I can only give it 2/5 stars, although that does feel a little on the mean side...

The plot centres around a weathly businessman who takes a ride with his misstress, crashes the car, she is killed so he walks away and try's to conceal it. It is then a battle between the Police and his family while all the while trying to set up the best deal of his life. We found it a bit disappointing.

This film can't be taken too seriously. The acting was very good and the plot equally interesting, however, I was glad the main character got his come uppance and lost everything due to his selfish lifestyle and his wheeling & dealing. Entertaining and useful on a cold winter's night.