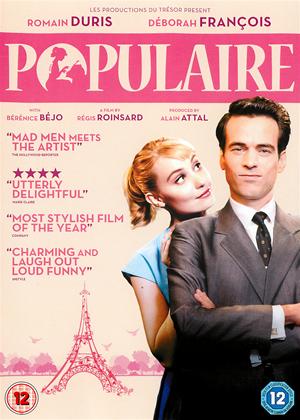 This film is so-so. Predictable, yes. Aping Hollywood comedies, indeed - and an American character here is obviously aiming for the US market.

But it's not too bad - a romantic comedy really. Some nice scenes and lines - and a snapshot of late 50s France.

Fun to see the French typewriter keyboard too.

Set in the sexist past, don't be put off by the weird idea of a typing completion. And some of you can't cope with subtitles, this has them

Girl escapes small town life, including impending marriage to the one prospect available, in search of work, adventure and romance. It is 1959, an age of speed-typewriting competitions, marked gender discrimination beginning to be questioned, and an ocean of American romcoms. 'Populaire' copies the style of those films (except for one sex scene which would never have got past the censors) and therein lies its weakness. There is not enough originality and not enough of the quirky comedy the French can be so good at (Amelie, Le Diner des Cons, La Cage aux Folles).

The acting too is only fair to middling. One ingredient essential in films of this kind is evident chemistry between the two leads - there is little on show here. Berenice Bejo, so good in 'The Past', has a supporting role, but can make nothing of a script which fails to sparkle.

There is charm, there is good photography, and there is enough of an interest in this trip back in time to keep watching, but it's not great.

Most mainstream French movies are about love, no wonder considering France is considered the birthplace of romance and all that good stuff but most of the time those films always seem to blend together and Populaire feels oddly familiar, especially to anyone who has seen Amelie or Romantics Anonymous, two delightfully funny films that Populaire borrows most of its story from.

Set in 1959 ,Populaire tells the story of Rose (Deborah Francois), a young woman from a small French village chomping at the bit to experience everything the new modern world has to offer. She moves to the city to become Louis’ (Romain Duris) secretary but he only seems interested in her typing and the fame he could achieve if he entered her into competitions, that is until he sees her potential.

While feeling like a rehash at times, Populaire is quintessentially French and for that reason it is a charming, heartwarming and captivating picture that is a loving tribute to the unbreakable spirit of a people who are still recovering from the 2nd world war a decade later. The film uses the war to add context and character to Louis, a member of the resistance who doesn’t fear conflict but everything else, especially genuine feelings.

This is made clear by a standout performance by Berenice Bejo (The Artist) as Louis’ long time friend and old flame Marie, a woman who knows exactly what kind of man Louis is and can cut to the core of him in seconds. The film is filled with rich characters like Marie, Rose and Louis and the film manages to handle their many demons in a light hearted way. So while it may descend into the realms of Disney in its conclusion it is a heartfelt drama about a man accepting his flaws and a woman discovering she might not be as perfect as she thinks she is