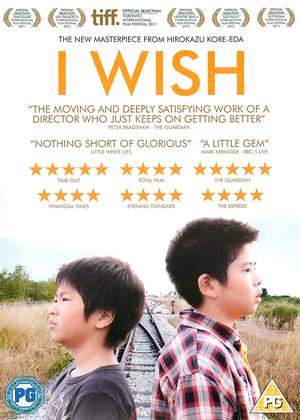 Sugureta (Excellent)! A ' Marmite Movie' that I loved. - I Wish review by SP

I find movies starring children a bit hit-and-miss - some are great and some - well - not so great! But this film is definitely in the former category for I absolutely loved it.

The Shinkansen that lies at the heart of the plot is only glimpsed for a few nanoseconds for two obvious reasons: first, the iconic train travels very rapidly;, and second, the aspirations of the children are given a central place. It is difficult to be sure with a foreign language movie, but the outstanding child actors seemed really 'natural'; at times it felt like a fly-on-the-wall documentary with the camera just lurking on the sidelines.

I found the movie by turns charming, funny, poignant and moving. I especially liked the scenes of contemporary Japanese life both in cities and the countryside; the buildings, food, the education system and transport infrastructure.

I am sure this is very much a 'Marmite movie' that divides opinion. The plot is very, slow, meandering, whimsical and at times a bit contrived. But it is a film to just sit back and let the many themes wash over you as they slowly unravel and intertwine. At times it looks a bit random but there is a lot going on and I am sure the Director knew just what he wanted.

Delightful, but over long film - I Wish review by ST

The performances of the children were particularly good in this delightful film.

However, I think the first half was rather too slow moving and overall needed editing down by about half an hour.

Long-winded and no story - I Wish review by AR

Perhaps someone conversant with Japanese culture would understand this film better, but the absence of a story - at least in the first hour: we didn't wait any longer - tried my patience.

How to combine charm with depth - I Wish review by TE

A wonderfully humane film from Koreeda, full of wit in the dialogue and boasting excellent ensemble performances by all the children involved.

There is real poignancy in the "wish list" of the children, with hope and optimism at the heart of the movie. Koreeda avoids any drift into sentimentality, thus ensuring that this is accessible art-house direction at its best. His films achieve an effortless warmth and humanity.

I Wish (aka Kiseki) review by Alyse Garner - Cinema Paradiso

Following the divorce of their parents two brothers, living apart one with their mother and one their father, hear of the construction of a new bullet train that will link their separate towns and believe that, at the moment two trains pass one another on the new parallel tracks, a moment of magic will occur, granting wishes to any who ask them.

This absolutely beautiful movie is most unlike anything Hollywood could produce, renowned Japanese director and screenplay writer Hirokazu Koreeda takes what could have been an over sympathetic and unrealistic story and turns it into a touching coming of age piece in which the brothers learn that though magic may not exist it takes more than distance to keep them apart.

Moments of pure childlike innocence, such as the scene when, having scraped together enough money to purchase a train ticket, several children meet at the point of the train’s crossing and shout out the wishes they have carefully written on pieces of paper; or the images of Koichi sweeping the ever present volcanic dust from his home whilst feeling utterly lost as to why no one worries more about the constant rumbling of the mountain, will fill even the coldest of hearts with a soaring sense of pleasure. These moments of absolute gold put any fantastical magic to shame and it is apt then that Koreeda chooses to follow a more realistic narrative for the movie’s denouement.

Starring real life brothers Ohshirô and Koki Maeda this is an absolutely adorable movie about hope and joy; without the screen stealing performances of the Maeda brothers – who are both gorgeous and full of life – this movie would struggle greatly to capture the magic of childhood and would end on a note of disappointment when the magic of the bullet train is lost.