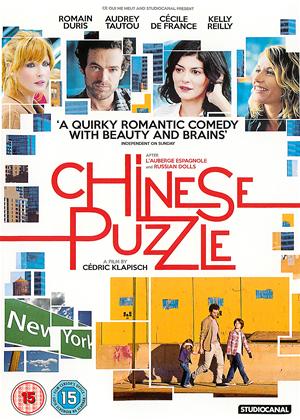 Having watched this excellent movie- witty, intelligent, sexy, imaginative and well acted, i now find it is the 3rd movie in a trilogy ! I have added the first two, Pot Luck and Russian Dolls to my future list “to watch”.

Fast paced, racing from France to New York, and mixing French and English ( and Spanish !) , it lives up to the running joke of “life is complicated”.

Gave up after fifteen minutes - Chinese Puzzle review by rh

I like just about every actor in this film, but I just could not get into the film itself. It felt like a waste of talent, and oddly did not feel French to me, The film had all these gorgeous people in it and it felt like that was all they were doing, being gorgeous.

Drawing together philosophical, romantic, personal and international themes under the same umbrella narrative is a feat few film makers could successfully pull off, however, in the third part of his trilogy (which began in 2003 with Spanish Apartment and was followed two years later by Russian Dolls) director Cedric Klapisch not only achieves this but does so with a wonderful and infectious sense of whimsy and charm that few can master even without the thematic challenges.

Telling the story of 40-something divorcee Xavier (Romain Duris) Chinese Puzzle is set across continents as he attempts to secure a green card in order to follow his ex-wife to New York where she has relocated with her new beau and Xavier’s two children. However, if this were not difficult enough, an intimately personal request from his lesbian best friend and the reappearance of his ex-girlfriend with her children make Xavier’s life even more complicated.

I needn’t tell you more about the film’s story as in a way it isn’t really that important, what is most integral to Chinese Puzzle is the characters and the strange, interconnecting nature of their relationships.

With some truly great performances and utterly brilliant casting choices Chinese Puzzle is an absolute delight; Duris is perfect as Xavier, once again capturing the insecurity and uncertainty of the men in Klapisch’s earlier features but with a maturity and, arguably, even more potent sense of the confused self. The juxtaposition of the three women in Xavier’s life, his ex-wife Wendy (Kelly Reilly), ex-girlfriend Martine (Audrey Tautou) and best friend Isabelle (Cécile de France) is both narratively and visually perfect whilst their individual performances are also excellent.

With a fun and utterly appropriate ending Chinese Puzzle is wonderful from start to finish, mirroring itself in it’s narrative, characters and themes whilst simultaneously highlighting the constantly shifting and juxtaposing nature of ageing and humanity.