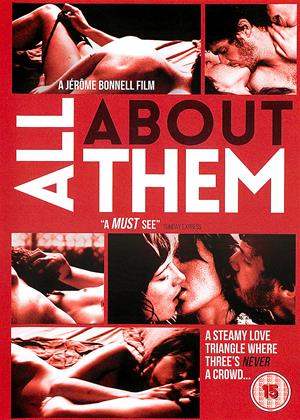 Reviews of All About Them

All About Them is yet another quirkily interesting feature from French filmmaker Jerome Bonnell, featuring a peculiar love triangle involving two girls and a boy that, oddly enough, all three have a romantic thing going on between each other. Oddly because love triangles usually involve one side getting the short stick, whereas in All About Them there really isn’t any kind of tension that would indicate anything of the sorts. And so, the film is a tensionless affair (both in literal and figurative sense) between three happy lovers who don’t have the narrative capacity to experience a real, devastating heartbreak. But it’s a romantic comedy after all, and for this reason only, I provide All About Them with a pass.

The film follows Micha (played by Félix Moati), a charming veterinary guy who’s in a relationship with Charlotte (Sophie Verbeeck); unfortunately, their romance is experiencing some undeniable ups and downs – in a phase where it seems like the downs are slowly beginning to prevail. Meanwhile, a third player enters the picture in the form of Mélodie (Anaïs Demoustier), a lawyer who has a thing for both Micha and Charlotte – behind everyone’s back. So in a sense, everyone is betraying everyone, but somehow director/writer Jérôme Bonnellmakes makes it seem like it’s all fun and games and nobody’s feelings are hurt in the slightest.

To this extent, All About Them is considerably unrealistic; but since it is marketed as a romantic comedy, these antics wind up being funny, quirky, and totally harmless. Which is arguably both the weakest and strongest side of the film, simultaneously.

Thankfully, the irresistible charm of the three leads makes All About Them worthwhile. And reasonably so, because the majority of the film revolves around these characters, their interactions between one another, their lunging, their wishes, desires. In fact, I’ll go as far to say that the side characters are just complimentary to the plot, if there was any to begin with. Which is not so bad in and of itself, since the erotic elements revolving around these three make the triangle turn into a prism, or even an oblique cone, where (as I’ve said above) usually one side ends up getting the shortest end of the stick.

And what about the story? Well, for a feature of this magnitude, All About Them doesn’t break conventions – nor it experiments wildly enough for it to be called a genre-defying piece of cinema. Instead, the film walks onto a safely constructed paved road without missing any steps while doing so. Which is not a bad thing on its own, but it’s certainly not an argument for an Oscar consideration either.