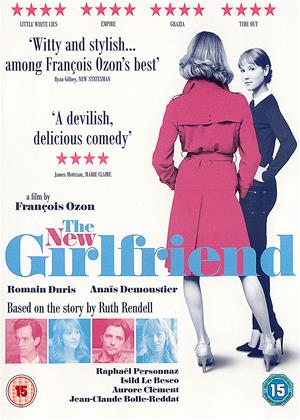 Reviews (4) of The New Girlfriend

Ozon takes a challenging subject, but approaches with too much caution. - The New Girlfriend review by TJ

I'm a huge fan of most of Ozon's films, though I always approach them with a degree of caution as he has a few stinkers in his filmography too. The New Girlfriend is a story of love, homophobia and more importantly, identity. The key to understanding the characters is the backstory at the very beginning, the problem is this section felt very rushed and maybe didn't expand on the lives of the protagonists as much as it should have. An extra half-hour or so running time felt necessary.

The result of this is that it was difficult to understand some of the character's motives later on, but this aside, the plot develops wonderfully, and is helped with a truly engaging performance by Romain Duris.

As the relationship between Romain (David) and Anaïs Demoustier (Claire) develops, the film starts touching on issues of identity and phobia, but Ozon could have pushed these themes much more, and a more challenging film always seemed to be on the cusp, but instead the director chose to play it safe. A shame, as The New Girlfriend could easily have become another example in recent French cinema where boundaries are pushed away from the safety net of mainstream film, and it probably would have been all the better for it.

Stylish, short on substance: - The New Girlfriend review by CM

It all looks lovely, not badly acted, but fails to show any engaging (not necessarily sympathetic) or credible characters, the plot is flimsy as can be, & the baby which should be the lynch-pin of the plot is reduced to a prop in this shallow story.

A couple of minutes in I suspected this was not going to be a masterpiece of cinema.

I am surprised some reviewers have regarded it seriously and even offered praise.

Clever and thoughtful film - The New Girlfriend review by RD

The main story is fairly simple, and parts could be described as predictable, however the clever part of this film is the amount of detail it covers within the story. There are so many personal identity issues with just about all the characters involved which are brought up in a smooth flowing plot and well handled. Nobody is perfect.

Nothing feels rushed or slow, good editing has ensured the pace is consistent and the photography is excellent.