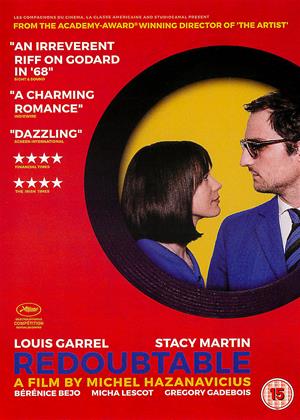 If you’re into film, you have to be into Godard. This reviewer rates his Alphaville as one of the best films ever made (hence my CP nickname). Redoubtable is an irreverent, unsympathetic but humorous take on him at the time of the 1968 Paris riots, when he was beginning to give up mainstream cinema for something more political and radical. Even his fellow revolutionaries want him to go back to making films like his old ones.

It’s based on the books by Anne Wiazemsky, his then wife and muse, so she is inevitably the more sympathetic character. The French title Le Redoubtable is more apt because the film draws parallels between Godard and the revolutionary submarine of that name that was launched at the time.

The American title Godard Mon Amour is perhaps meant to be ironic but it suits the film’s tone, which is surprisingly light and humorous throughout. It even plays the bloody Paris riots to a jaunty score. Godard is shown as a buffoon, with a recurring theme of him getting his glasses broken in various confrontations with the police. Louis Garrel plays the part perfectly, as does Stacy Martin As Anne Wiazemsky.

The most fun for Jean-Luc fans comes from the way director Michel Hazavinicius uses Godardian visual flourishes to tell the story, such as the b/w nude poses of La Femme Mariée and the talking to camera of Masculin Féminine. The funniest scene has a full-frontal naked Jean-Luc saying there’s never a justification for nudity in films.

The film’s subject matter will hold little appeal to a multiplex superhero audience, but it’s lively, colourful, imaginative and a must for Jean-Luc fans. If you can get past the anti-Godard bias, it’s a reminder of how inventive cinema can be.

interesting but not flattering to JLG - Redoubtable review by hm

There are some nice moments in this, I would recommend to both lovers and haters of JLG and the other review sums it up perfectly.