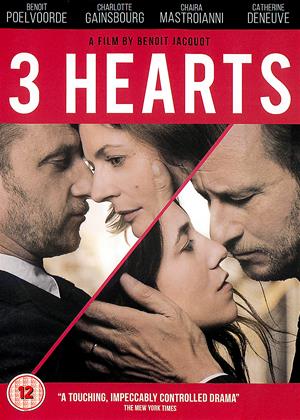 3 Hearts by director Benoît Jacquot is a mixed, overly typical ‘French’ experience sort to speak, that aggressively embraces a thriller etiquette more through reflections of its music – rather than via what’s really going on in the film. And when a repetitive soundtrack has a much deeper impact as opposed to visuals – then you surely must admit that you gave priority to the wrong medium.

Marc (Benoît Poelvoorde) is a tax inspector whose duties, more often than not, transmigrate his talents to the nearby provinces of Paris. As all fairytales go, one day Marc misses his train and through an accidental stroke of chance meets Sylvie (Charlotte Gainsbourg), with whom he instantly develops a mutual deep connection which is posed to last a lifetime.

However, not everything goes according to plan.

During the next day, Sylvie and Marc’s arranged date ends up unsuccessful due to the fact that Marc has second thoughts about her and questions everything that he’s done thus far. From here thereon, it seems as if their destinies branched off to two different paths, only to again intertwine with the little help of 3 Hearts’ screenwriters, who introduce Sylvie’s sister Sophie into the picture (played by Chiara Mastroianni).

Heartthrob Marc’s charisma doesn’t stop here, since he must acquire a lady’s attention no matter what consequences that may bring onto his reputation. His reputation however precedes his logic for one, as Marc struggles with his deductive powers and doesn’t realize that indeed – Sophie and Sylvie share the same surname.

What follows next is a mediocre love triangle story penned by scribes who don’t care about pacing, building up tension through character conflict or just plain keeping things interesting in a sole sense of the word. Yes, the characters show great passion towards one another, and that’s all we as the audience get. No arcs, motives, or anything of the sort. For this fact alone, I have to congratulate Marc and Sylvie’s libidos that topple every love affair I have seen in the movies in my 26 years of Earthy existence thus far.

3 Hearts in parts plays greatly similar to the ancient Greek tragedies, where coincidences happen out of nowhere and no one dares to question what, why and how certain events led to a death which could’ve been easily prevented (Oedipus, Antigone, etc.). Here, there’s not much of a tragedy per se, only a stream of very improbable events that really lead up to nothing. If it not for the great acting, this movie would have easily been dismissed as yet another European flick without real substance within its passionate confines.

Next time guys – try to at least give the protagonists a will to make a decision, no matter the consequences that may follow later on.