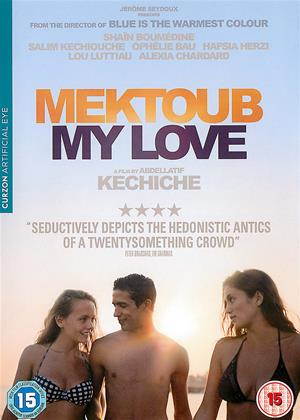 Reviews (3) of Mektoub, My Love

Lots to like - and dislike - Mektoub, My Love review by PD

Plenty to like here: the film is something of a 'sensory epic' in which its characters revel in a riot of physical pleasure. And on a completely different note to the film's whirl of human chaos, there's also a extended documentary-style sequence of lamb birthing which is totally compelling. A genuine lust for life is undoubtedly at the centre of Kechiche’s filmmaking.

BUT unfortunately there are many weaknesses also. The main problem is the perspective of the film's main character Amin (newcomer Shaïn Boumédine), whose general uncertainty of himself and difference to the mass of humanity around him makes him a naturally sympathetic anchor for the film, but not a terribly compelling one: Kechiche’s script keeps him a largely passive presence throughout, his innermost thoughts and urges unknown to us. Similarly, the character of Ophelie is hardly fleshed out (no pun intended) at all beyond a few scenes on her family farm, which is a pity - what lay behind her choice of partner, whether she regrets her choice, what is going on in her head at any point - are all mysteries.

Then there's the well-documented male leering gaze and the endless bottoms - which are not only tiresome in the extreme, but rather baffling as it seems inconsistent given the thoughtful characterisation of the film's female cast — whose generation-crossing scenes together, as they gossip amongst themselves and analyse their life choices, are some of the film’s most meaningful and most authentic.

And finally whilst Blue is the Warmest Colour for me used its supersized running time to good use, mapping the extensive internal transformation of an unformed girl growing into adulthood, the 186-minute duration of this one feels a lot more ostentatiously stretched to the point of self-indulgence — the lengthy, gruelling nightclub sequence towards the end, in particular, is simply an endurance test. Rather frustrating viewing on the whole therefore, sadly.

Light on plot but utterly immersive - Mektoub, My Love review by AER

Abdellatif Kechiche's Mekhtoub My Love - Uno Canto is the first in a trilogy, and at 3 hours long this is an epic character study based on a close-knit group of friends living in the South of France. There's isn't much introspection or revelatory conversations between the characters but it's meditative and utterly engrossing if you just let it run and don't mind the lack of story. It's a mirror of life with some opera music thrown into the sound mix here and there. It will frustrate the majority of viewers hoping for a coherent story line (there is none) or action, but if you just like people watching, then this is an immersive treat. 8/10

TOO LONG - Mektoub, My Love review by KW

At just under 3 hours this film for me dragged along trying to fill in with extended scenes that could have benefited from some judicial pruning.  Also as it progressed my empathy for the characters waned to the point where I almost stopped watching so bored was I by it.