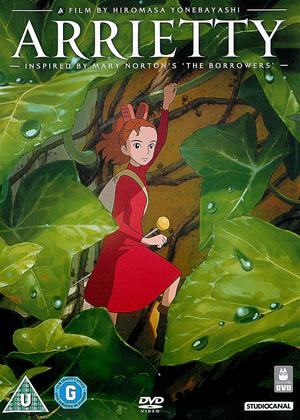 Synopsis:
Beneath the floorboards of a sprawling mansion set in a magical, overgrown garden in the suburbs of Tokyo, tiny 14-year-old Arrietty lives with her equally tiny parents. The house is occupied by two old ladies, who are unaware of the existence of their miniature tenants. Arrietty and her family live by "borrowing". Everything they have, they borrow or make from the things they have borrowed. A sugar cube here, a scrap of material there. But only a little each time, so the ladies do not notice. Arrietty's parents have always warned her: "Never let humans see you." Once seen, little people always have to move on.
But the adventurous Arrietty doesn't listen, and soon she gets discovered by Sho, a 12-year-old human boy who lives in the mansion. The two begin to confide in each other and, before long, a friendship begins to blossom...
Directors:
Hiromasa Yonebayashi
Producers:
Soledad Gatti-Pascual, Frank Marshall, Toshio Suzuki
Voiced By:
Bridgit Mendler, Amy Poehler, Will Arnett, Moises Arias, David Henrie, Carol Burnett, Shin'ichi Hatori, Saoirse Ronan, Tom Holland, Luke Allen-Gale, Olivia Colman, Mark Strong, Phyllida Law, Geraldine McEwan, Ray Gillon, Steve Alpert, Tatsuya Fujiwara, Peter Jason, Ryûnosuke Kamiki, Kirin Kiki
Writers:
Mary Norton, Hayao Miyazaki
Aka:
Kari-gurashi No Arietti / The Secret World of Arrietty
Studio:
Optimum
Genres:
Anime & Animation
Countries:
Japan, Anime & Animation

The story is hardly new and has been told and retold many times since the original success of Mary Norton’s The Borrowers in 1952 and Arrietty stays fairly close to the original. The movie tells the story of a family of tiny humans who live in the house of two older Japanese women, and survive by borrowing items from the women’s home. Things change however when a young boy comes to stay with his Aunt who owns the house and discovers the existence of Arrietty and her family; at first Arrietty, who for years has been sheltered by her parents from the dangerous world of the full sized humans, is afraid of the new arrival, over time however the two develop a gentle and quite moving relationship in which they both find they are able to escape the restraints of their individual lives.

In true anime fashion Arrietty has a fantastical and magical feel to it that has been a little lost in some previous adaptations of the story, yet what is most enchanting about this piece is the friendship between Arrietty and Sho, the sickly almost house bound boy who learns of her existence. Their friendship symbolizes the connection between two worlds that can seem markedly different but are still able to conjure the same depth and intensity of emotion between those living within them.

This again, is hardly a new idea however, and fantastical escapism is somewhat of the bread and butter of anime feature films, with this in mind it is difficult to feel too blown away by Arrietty despite it’s charm; I can assure those first venturing into the world of anime that this may well be a great place to start, as it combines the familiar Western story with tastes of the fantastic Japanese art form, it is not comparable however to classics of the genre such as Spirited Away or Howl’s Moving Castle.