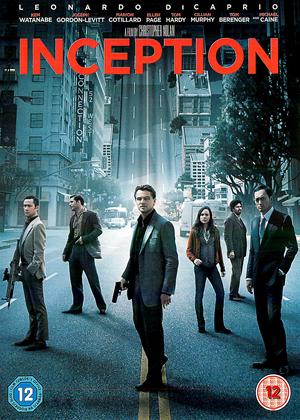 Only managed to watch 10 minutes of this before giving up. The sound quality is terrible (really quiet dialogue prompting you to turn the sound up, followed by booming music and action, which is then far too loud) but worse than that the film is totally incomprehensible! Call me old fashioned but I do like to have a clue what's going on when I watch a film.

Inception is about a small group of crooks who are involved in corporate espionage in which they tap into an individuals dreams and steal information, sometimes creating a dream within a dream. After getting caught out by a Japanese businessman they are trying to steal from, he offers them a job which has been thought to be impossible, the act of inception, planting an idea in someone's mind within a dream. To create this illusion they have to create dreams within dreams with each dream layer time passing faster than the dream layer before. While the story sounds complex it isn't that complicated and easy enough to follow. And while there seems to be loads of hype about the film, especially the explanation of the ending, it seemed fairly straight forward to me. The CGI was very good (especially the zero gravity scenes), but to echo another reviewers comment the sound level, at least on the Blu-Ray was really erratic and throughout the film I was constantly having to turn the sound up and down. All in all, this is a fairly decent action thriller, not as mind-bending, clever or profound as the hype makes it out to be, and feels every minute of its 2 hours 45 minutes running time. It's a solid rental title but not the must see movie I was expecting.

I know some people love this movie and that the critics loved it too and that the script is favourite to win the best screenplay oscar but - I just didn't like it. I found it boring, predicatble and nowhere near as clever as it thinks it is.

I do so hate these Hollywood mocies that think they're intellectual and profound; OH NO THEY ARE NOT! They are just tricksy and gimmicky and adolescent.

Not original either - the Stephen King TV movie the Dead Zone was about living in dreams too - as were many ancient texts. I suppose the difference here is that this is big budget with loads of CGI and Leonardo di Capuccino doing this thing. But it did nothing for me, I'm afraid.

I found myself looking at my watch wondering how long before it finished - BUT if you like adolescent stuff like the Matrix, you'll love this.

Dream worlds that people can enter. How do they know what is real and what isn't? What happens if they don;t come back out of the dream world? Slickly edited, head-spinning stuff, with superior effects and enough excitement to paper over the ambiguities, complexities and implausibilities (what does a dream architect actually DO?). Well worth watching, and with good added extras.

I agree with the previous review. The plot was not too challenging but you do need to concentrate. Overall a great film with an interesting philosophy.

Others have said they had a problem with the sound. I had the Blue ray version and have a 5.1 system. The sound was great with the narrative particularly clear.

I don't believe it - Inception review by CP Customer

Sorry I like DiCaprio and have enjoyed his movies in the past but found this to be laborious and at times confusing. The plot is unbelievable and the sound not good. Shame cos was looking forward to watching it following the cinema reviews but overall it was disappointing - so much so that I ultimately switched it off.

A simply stunning film, Great effects, suspense and storyline. Not as good the second time round watching at home compared to the cinema, However it did help clear up a few missing plot lines i missed at the cinema, as I was blown away by the music and effects.

The thing about films where they are sci-fi or dreams is that the writer/director could have chosen any scene or effect. The fact this film is set mainly in a disused warehouse and a hotel corridor, or in a limbo land designed by Leonardo DiCaprio's character (which seems to me the dullest land he could have thought of) makes it seem a bit unimaginative. At it's heart, this film is a rip off of the Matrix and wants you to think if it could really be true (are we all living in a dream etc). I'm left with the feeling that it's a decent idea for a film, but I could've done a better job with the plot. Didn't deserve to be nominated for a best oscar.

Something for everyone - Inception review by CP Customer

Fast pace, plenty of action and special effects, at times reminded us of James Bond films.

I watched this film several times and look forward to the sequel.

For me the measure of a truly great film is whether I can watch it repeatedly and still get something from it. Over the years there have only been a handful like this, and this is the most recent...

It succeeds in welding together a novel storyline, some deeper ethical considerations, plus relentless action and absorbing CGI.

I can't think of anything that would stop me recommending this film...

As the man said - rubbish ! - Inception review by JK

Thank you Mr Nolan for yet another complete waste of time and energy -ours trying to watch it, not yours for making it although some might disagree.

2010’s Inception is a mind-bending foray into the land of nod. Director Christopher Nolan helms this unique story about a man who specializes in extracting information from people’s dreams.

Leonardo DiCaprio plays Cobb, an experienced extractor who, along with his partner Arthur (Joseph Gordon-Levitt) are hired by various entities to extract information from certain people. The team, however, is hired by Saito (Ken Watanbe) to do just the opposite, implant an idea in a rival businessman’s (Cillian Murphy).

Though not impossible, inception, as it’s called, is much harder than extraction. For this, Cobb and Arthur assemble a team of other dreamers played by Ellen Paige, Tom Hardy and Dileep Rao to complete the mission. But can Cobb, who still struggles with remorse from his wife’s suicide, keep himself together long enough to complete the mission and keep everyone alive?

What follows is a supremely interesting and confusing story.

Essentially, Inception is a modern day heist film told that boldly distinguishes itself through its originality.

Christopher Nolan has always set himself apart from the pack with his unique point-of-view towards story. He even manages to make a 70-year old character seem new with his Batman films. He gets credit for writing and directing this one.

Where the film loses its steam is throughout its complex plot. There are moments in the film when it seems as though the movie takes its rules for granted. For example, in the opening scene, it is stated that if you die in a dream, you simply wake up. However, later in the plot and deeper into the dream world, they say that if you die while you’re a dream this deep, that you die in real life. Though they give an explanation, it still seems as though they’re changing the rules to fit the plot.

Wally Pfister, the director of photography, won the Oscar for best cinematography, and it was more than deserved. The beautiful landscapes, intricate motion and flawless framing added a sense of pulchritude that’s hard to get in an urban setting. The film also brought home awards for Best Visual Effects, Best Sound Editing and Best Sound Mixing at this year’s Oscars, and again, all of them deserved.

The actors and characters of the film are what ground its complexity. Leo is wonderful as the broken Cobb and Joseph’s Arthur is the perfect compliment for the team. Ariadne, whose name is as complex as the plot serves as little more than the audience’s guide to the dream-world is saved by Ellen Paige. Even Nolan alum Michael Caine makes a guest appearance as Cobb’s father.

Though it struggles with maintaining its structural integrity, the talent with which it was made and its sheer originality gives the modern audience, who’ve grown tired of the consistently hackneyed stories permeating our cinemas, what we’ve been dreaming of.