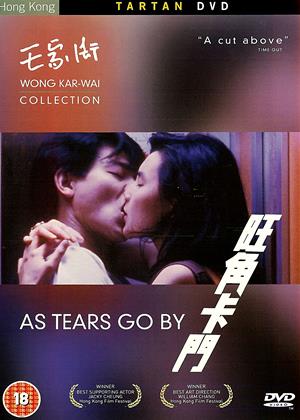 A Mishaped Action - As Tears Go By review by MN

As Tears Go By is the debut film of Mr Kar Wai, dating all the way back to 1988 and containing a love letter to both Hong Kong action movies and gritty urban American dramas. I'm not the first to say it but the film has long since been described as a response to films like Mean Streets, which it is, but it’s also a reflection of the cultural legacy of Hong Kong too.

If you’re not aware, Hong Kong’s cinema industry was built on action. It wasn’t the only type of movie out there but it was Huge. Prior to Wong Kar Wai, the famous exports often came from the Shaw Brothers studio – a studio who, beginning in 1925, made a huge impact on the realm of the film industry with a unique brand of provocative, funny, and downright crazy series of action films. Marking their allegiance to Asian Martial Arts, their work made a huge impact on filmmakers, stretching into the late 80s when the country’s Second Wave began. Most importantly, it made a huge impact on the likes of Wong Kar Wai and John Woo – the country’s best-known filmmakers to date.

With that in mind, As Tears Go By can easily be assessed by reflecting its roots. Wong Kar Wai would go on to form a highly unique style of cinema but it's rarely evidenced in this film alone. Instead we have a synth-laden, gangster film about two competing small-time street gangs and the result is, looking back, a well-shot oddity. It reminds me as much of the urban ennui pushed to the fore of Fallen Angels, Chungking Express, and In The Mood For Love as much as it does the stylised action of John Woo’s ultra-violent gangster movies: A Better Tomorrow, and The Killer.

Not a poor movie by any stretch, it’s a hardly remarkable one either. In fact, the film feels very much like an oddity: a debut film going through ideas but not mastering any of them.

The love-story that takes place between Lau and Ngor will remind anyone instantly of his later films but the insistence on action makes the film feel uneasily like the project may well have been out of Wong’s hands. At times, the film seems to revel in violence, while at other points it’s more like a slow perfume commercial happy to languish on the disaffected nature of its characters. Fans aware of his other films will no doubt see recurring elements but As Tears Go By lacks a lot of cohesion judging it alone.

Not that this should put you off. If you’re interested in Wong Kar Wai, and you’ve seen almost all of his other films, then I’d definitely consider it necessary viewing – if just to see how he developed from this to Fallen Angels and Chungking Express some 6 years later.