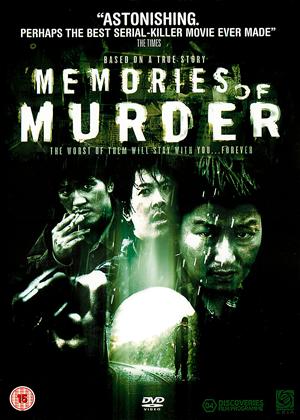 Reviews (5) of Memories of Murder

Memories Of Murder - Memories of Murder review by CP Customer

Based on the true story of a small South Korean village in which someone begins to murder young women, the plot of 'Memories Of Murder' revolves around pair of detectives and a special agent from Seoul assigned to find the murderer. Faced with crime scenes are routinely disturbed by the locals and a forensic team which are always a no show, the special agent is shocked to find that brutal local police are less interested in solving the case and finding the killer and more interested in finding a scapegoat, someone to blame in order to pacify a restless local population. With memorable dark visuals, a haunting score, and a great story, this is a film which succeeds brilliantly as a deeply haunting and disturbing crime thriller. If you like foreign cinema and enjoyed films like 'Insomina' and 'Seven' then 'Memories Of Murder' is essential viewing.

A gripping, at times harrowing account of a hunt for a serial killer in rural South Korea. Song Kang ho (brilliant in “The Host” and “Thirst”) is sublime again as a harassed local cop who gradually realises that his usual tactic of pulling in the local lowlives and beating confessions out of them isn’t going to work. He has to accept the help of city detective Kim Say Kyang who goes about things in a more cerebral way, a kind of Sam Tyler to Song’s Gene Hunt. It reminded me a lot of David Fincher’s “Zodiac” - here too, the focus is on the investigation rather than the occasionally glimpsed crimes, and the long-running case has a similarly corrosive effect on those hunting the killer. Apparently it’s one of the most popular South Korean movies of all time and it’s easy to see why.

Unfortunately true stories told accurately are a bit messy and do not have a neat conclusion. I think this is even more difficult to follow as it is Korean. It is however an interesting film on many levels. As a historic piece about South Korea in the 80's, it is also a comment on police methods of the 80's, and as a contrast with Western cinema. I enjoyed the almost comedic over acting and the gentle unravelling of the plot. The characters are not lovable but genuine and complex enough. It has no real end but is an interesting angle on a serial killer.

In the mid-1980s, a serial rapist, sadist and murderer killed 10 women (young and old) in a provincial South Korean town. The local police force botched up the investigation and never managed to catch the killer, despite getting help from a more sophisticated detective sent over to assist them from Seoul. The movie tells the story of the police investigation and the gruesome murders.

It is a good film: rather than a conventional thriller, it is in the tradition of social realism in film, with the stress on antiquated police methods typical of those times, i.e. beating up suspects and, in effect, torturing them until they confess. There is no doubt that it is a realistic portrayal of 1980s South Korean society outside the capital.

I found the film slow in the 1st two-thirds, but the last third is more interesting, as the Seoul-based police detective starts coming to terms with the reality of the situation. I also found the film nauseating rather than thrilling, I must admit. It is not so much the accumulation of monstrous murders and dead bodies. It is, rather, the fact that absolutely all the characters, except the Seoul-based police detective, are so coarse, crude, uncouth, unsophisticated, ugly, violent, drunken, and frequently stupid: are South Korean provincial types really so hopeless, so crass and so primitive? Even the Seoul-based detective is not that smart, and his morals or work ethic are not that strong either.

So, a good film, but you need a strong stomach to enjoy it, if 'enjoy' is the right word. A bit like kimchi, if you have tried it: it is an acquired taste, in my view.

To end on a positive note: the killer was caught in October 2019, according to Wikipedia. He was in jail for murdering his sister in law and DNA analysis has linked him to the crimes depicted in the movie.

If this is the type of entertainment South Koreans like, well good luck to 'em! - Memories of Murder review by DW

I watched it right through because I wanted to see who the serial killer was but I found the entire experience to be thoroughly underwhelming.

In the final scenes, the picture quality improved enormously: I wonder why that wasn't the case for the rest of this film. Had it been, I might've given it 2 stars.

Memories of Murder by director Joon-ho Bong is the quintessential crime drama thriller and that’s non-debatable. This film is crafted to such perfection that if someone ever decides to remake it, that would be a crime against humanity of the highest order. Simply stated: Memories of Murder has it all: intrigue, stellar plot, carefully-crafted characters – each with their own agendas, motivations, pluses and flaws (including hubris). But, perhaps the most important aspect of this film is the ensemble casting (as described by Tony Zhou in one of his video essays); it’s just, they don’t make films as they used to: nowadays it’s only close-up, then switch shot, then another close-up after which the actors themselves are put in a tougher spot than if they’d just acted like they were part of an ensemble. But I digress.

The film begins by showing the audience a gruesome murder (implicitly) which has taken place in some of South Korea’s most remote rural areas in the fall of 1986. The detective assigned to this case is Park Du-Man (played by Song Kang-Ho) and it becomes immediately clear that the whole police force is way out of their comfort zone in regards to these crimes. This is also emphasized through the chaotic crime scene as reporters trample potential evidence and make it even harder for the police to do their jobs. This is South Korea’s first recorded serial killer in history, so it’s quite clear that the nation wasn’t ready for this kind of upheaval – at least not at that exact time.

Putting that aside, and we see how inspector Park is a far-cry from a meticulous police investigator, who seems to abandon the scientific method in favor of a more scattered approach and by using the brute force of his assistant Cho Yong-koo (Roe-ha Kim). After all, it got them this far, right?

The arrival of Seo Tae-Yun (played by Kim Sang-Kyung) however, a methodical and rational investigator from Seoul, hints at a more measured approach from the force at-hand. At first, this seems like it’s the case, but as things slowly unravel to no avail and the culprit is nowhere to be seen, it seems as if Seo’s arrival only served the purpose to stir things up from within the police force, and not solve the crime that took the whole nation by storm. But Seo doesn’t have any ulterior motivations, and so why was he summoned in the first place?

Ultimately, if you want to see the best crime-thriller from your lifetime, this may be your best chance. Memories of Murder is just brilliant and I’m saying that with 100% devotion and honesty.