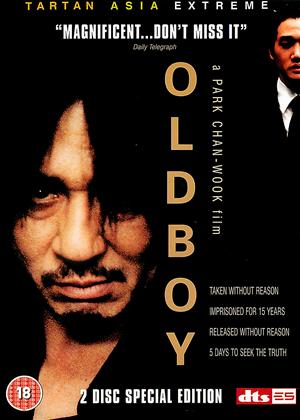 Synopsis:
A man is inexplicably kidnapped and imprisoned for 15 years and his wife is brutally murdered. On his release, he is given a wallet full of money and a mobile phone. A stranger calls and asks him to try and figure out why he was imprisoned. A girl appears and promises to help him solve the enigma and seek vengeance for his cruel fate. As the search progresses, the man finally comes face to face with his kidnapper, who proposes a game: if the man discovers the reason for his imprisonment, the kidnapper will kill himself. If not, then the girl will be killed. He only has five days to unravel the mystery.
Actors:
Min-sik Choi, Ji-tae Yu, Hye-jeong Kang, Dae-han Ji, Dal-su Oh, Byeong-ok Kim, Seung-Shin Lee, Jin-seo Yoon, Dae-yeon Lee, Kwang-rok Oh, Tae-kyung Oh, Yeon-suk Ahn, Il-han Oo, Su-hyeon Kim, Seung-jin Lee, Su-kyeong Yun, Myeong-shin Park, Yi Yong, Joe Cappelletti, Mari Devon
Directors:
Chan-wook Park
Voiced By:
Joe Cappelletti, Mari Devon, Crispin Freeman, Steve Kramer, Sherry Lynn, Michael McConnohie, Stephanie Sheh, Kirk Thornton, Kari Wahlgren
Writers:
Garon Tsuchiya, Nobuaki Minegishi
Others:
Park Chan-Wook
Aka:
Oldeuboi
Studio:
Tartan
Genres:
Action & Adventure, Drama, Thrillers
Countries:
Korea, Action & Adventure, Drama, Thrillers
Awards:

A drunken man named 'Dae-Su' disappears one night after being released from a police station only to be kidnapped by anonymous captors and imprisoned in a hotel room. For the next 15 years he finds himself incarcerated and has little contact with others. He obsessively watches T.V where he learns of his wife's murder and his daughters' placement with another family. Occasionally the room fills with a sedative gas and when he awakes he finds himself clean shaven and haircut. This routine continues through a 15 year period, when suddenly he is released, he then enters on a surreal and violent odyssey of revenge to discover the identity of his captors. This is an excellent film about revenge and how it can possess someone to the point of self destruction, and where Quentin Tarantino's, entertaining 'Kill Bill' is also based around the theme of revenge; 'Old Boy' is something else entirely. It's an absolutely stunning film that succeeds both as a violent action thriller and as a powerful thought provoking tragedy. There are some great fight sequences where Dae-Su's rage consumes him so fully he is able to fight off enemies with a knife sticking out of his back. There are also scenes of torture and gore that are particularly intense, although the extreme violence never overshadows the brilliance of this film. The well crafted story takes so many twists and turns that as a viewer you are almost always on edge, and just when you think you know where story is heading another there's yet another surreal twist to the tale. Be warned, this is not a film for the squeamish or easily offended, but if you can get past the violence and disturbing images, 'Old Boy' is an amazing film.

“Oldboy” is a riveting and totally insane slice of Korean extreme- the plot seethes with horrifying twists and turns, there is wince-inducing action and gallons of pitch-black humour; and at the film’s heart there is an outstanding bug-eyed performance from Choi min-sik as the man plucked from the street and imprisoned for fifteen years, then released without explanation. He sets off to identify his abductors and wreak revenge on them, only to find that they haven’t finished with him yet…

Like it or loathe it, it's a film you won't forget - Oldboy review by RP

The storyline in 'Oldboy' is complex – until you have watched to the end and all is revealed. Suffice to say that the film title itself is revealing. As part of the 'Revenge Trilogy' the film is most definitely about revenge. The central character is a businessman Oh Dae-su who is held prisoner for 15 years and then suddenly released. As he attempts to find and seek revenge, it becomes clear that it is he who is the target for revenge by someone he wronged in the past. And that revenge on Dae-Su is terrible, from his imprisonment, the killing of his wife, and the events which befall his daughter. The film is both violent and emotional – and has a nice, confusing, ambiguous ending. Like it or loathe it, it's a film you won't forget. 4/5 stars – highly recommended.

I think this film goes into my all time top 5, for its originality, shocking plot and its quite disturbing depiction of the sheer bloody mindedness of human nature. It is quite graphically violent in places, but not excessively so as to divert from the plot.

The acting and direction is first class and as my first introduction to the work of Korean director Chan-wook Park I was extremely impressed.