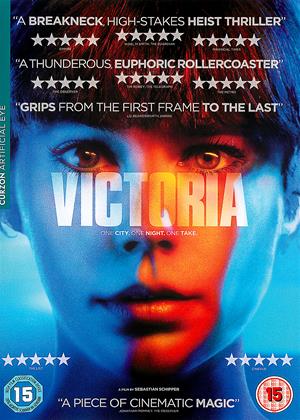 Well, it's a cheap and fast way of making a film. Shoot two hours of footage in a single handheld take and don't edit it. Sure, it's a technical tour de force. So what? Improvisation rarely works with actors and even more rarely with the camera. For half an hour Victoria wanders the streets of Berlin with a bunch of losers. Yawn, yawn. Best of luck sticking with it this far before any plot sets in. It's impossible to care about any of the characters, even the photogenic but gullible and irritatingly stupid Victoria.

After a whole hour she joins the losers in a heist Some frenetic home-movie wobble-cam (the worst since Blair Witch) is used to mimic tension but this only increases the arbitrariness of the image and makes the screen even harder to watch. Call it cinema verite, call it guerrilla filmmaking, it's still like watching the home movie of someone who can't hold a camera steady. And there's still another hour to sit through. All-in-all, 132 minutes you'll never get back.

Ignore the unaccountably good reviews this style-free so-called film somehow garnered. Some critics would probably see the emperor's clothes. It is simply one terrible home movie, like a talentless version of Run Lola Run. Watch that again instead.

7 out of 13 members found this review helpful.

So good - Victoria review by AM

Shot in one take. 4 of the 5 reviews mention this. It seems to be the only thing anyone knows. It's an outstanding technical achievement (this isn't a film set in one place, it moves location constantly, and the camera has to move with it), but it's also a great decision as it helps drive the film forward, and to lock my attention in. There are, unquestionably, one or two points where the decisions Victoria makes are odd (particularly early on) and I knocked a star off for that.

I persevered for an event-free 20 minutes, then gave up out of sheer boredom. The actors seemed to be enjoying themselves, not too sure why.

Reviewers are sharply divided. You will probably know in 20 minutes which side you are on. Don't be distracted by gawking at the one-take achievement (although Victoria on screen continuously for 2hrs 18mins has to be impressive). Its not the FACT of the one take, its the EFFECT of the one take. Animating the actors and giving the viewer an extraordinary sense of presence. But, for sure, it wont be for everyone. Even better than Run Lola Run (don't miss that either).

Who cares? - Victoria review by MW

Fascinating though the real-time single-take concept may be, it’s really hard to identify with or care at all about a set of characters with no back-story and who do very little except shout at each other for the first 20 minutes. After which we gave up and watched Jumanji 2 instead.

I sat through an hour of this boring, dark movie waiting for some action and wish I chosen something different. Not my cup of tea at all. Note to self: must start reading reviews BEFORE I put them on my watch list. Lesson learnt !

Too long and not very interesting - Victoria review by RT

The main problem with Victoria is that like Birdman before it the whole idea of a "single continuous take" film just doesn't work because it feels like it is just going on and on with no pause for breath and no chance to build any decent characterisation other than what you get blasted at you non-stop so the whole thing just grinds you down until you start wishing it was just over because you don't care about anyone in it or what happens to them.

Why? - Victoria review by TJ

So it was shot in one take.... makes you wonder how many more tedious hours we were saved from by the editor hours .... as other reviewers have said... why bother

I found this hard to watch - hard to keep engaged in. The male characters are so unattractive! But having stuck with it - it does resolve in an satisfying and interesting way. Also everything was so dark and the broken English very...........

I would have to say, that I think the other written reviews of the film aren't entirely fair. Sure, there are moments when you doubt the main protagonists would actually do what they are doing. But the film is very intense. Whether or not the one take shooting benefits the film is one thing, it's surely a great achievement though.

Will make you want to go to Berlin if you haven't. In fairness, I would agree by the end you are almost relieved that it is over. But I don't think all films should should make comfortable watching.

Starts slow, but the moment that I knew I was hooked was when Victoria sits on the ledge of a building, several stories up, and I found I could hardly watch. At this point she's just hanging out with some sketchy guys, who are also begging her to stop taking such a silly risk. The single take engenders a powerful sense of connection to the action, and forces the viewer into a present-moment awareness that's uncomfortably like real life.