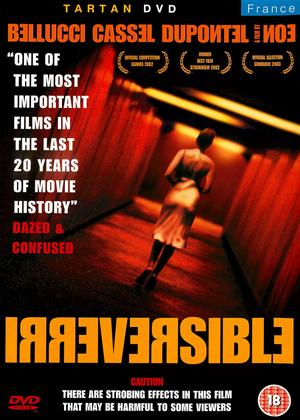 The film was cleverly shot, emotive and artistic in style, verging on beautiful at times. However the 'act of shocking violence' alluded to on the blurb is indeed shocking and not for the faint-hearted. Members would be advised to consider their threshold for unwatchable violence before seeing this film, unfortunately mine was definitely too low for Irreversible.

The first thirty minutes of this backwards –told story are as challenging an experience as you’re likely to get watching a movie- you get dropped into the middle of a furious confrontation in a squalid subterranean hell-hole (excuse the pun if you’ve seen the film) with no idea of what’s going on or who to root for, and the camera appears unable to settle and roves off to unhelpfully film the ceiling in the middle of the action. You then witness some truly gut-wrenching violence involving a fire extinguisher and as things start to take shape and a more settled narrative emerges, an even more shocking act takes place. If you’re up for all this, you’ll probably admire the film for its bold narrative and unflinching presentation of humans at our very worst. But it’s a really hard film to love!

The entire film is in reverse - which isn't as artistic as that suggests. It also has some of the most shocking scenes I've seen. I like to think I'm broadminded but 20 minutes of gay sex scenes followed by full-frontal transvestism was enough to make me turn off.

This film deserves less than one star. Why? It's boring boring boring - pretentious (well it is French) and adolescent in its desire to shock. You can almost hear the film makers saying 'yeah, let's do a long rape scene to shock people to get free publicity!' and another saying 'cool, and hardcore gay stuff will look well good' and another saying ' and I know, let's tell the stpry backwards to be really cool!'. The fact of the matter is, it'd be obvious to all how lacking in redeeming features this film is if it were told in a linear fashion. I was not shocked at all - I have seen it all before and I have no objection to rape or anything else being shown in the cinema. But boy was this a pretentiou boring load of old gallic guff! Watch to see what up-themselves film critics love these days... There are much much much better films about sex and abuse out there. Unboring ones! Ones that are not desperate to shock like an attention seeking sex-obsessed young teenage boy!

0 out of 9 members found this review helpful.

A stomach churning movie about about horrible people,a perfectly valid scenario for a movie (after all many of us are monsters) but i wish i hadn't watched it.

A thoughful examination of a dark subject - Irreversible review by LC

Going in, the only thing I had heard about this film was that it contained a scene of infamously gratuitous sexual violence. This is true up to a point, and squeamish viewers might wish to stay clear, but this is a long way from a cheap shock exploitation or horror film. Highly formal in composition, this is as much a cerebral take on events as it is a sensual one, inviting thoughtful analysis as much as gut reaction (even during the attack there are interesting touches, such as the woman's face never being shown, or the way the camera is pinned stationary to the ground along with the victim). The way the narrative plays out in reverse chronology invites the viewer to try and piece the story together, hinting at a certain inevitability to events and the character's fates, and also highlighting the ultimate inability of revenge to turn back the clock. Posters for Kubrick's films are given prominence towards the end, and it's a fair comparison - if you're the sort of person who finds something like 'A Clockwork Orange' interesting (rather than just mindless violence), this will be right up your street. One final note: this should probably come with a warning for those who suffer from light induced epilepsy - the final scene is incredibly 'flashy'.

I'm about to reorder this film.. I watched it on release in the cinema ... So this review is done by memory... which in itself is startling, given the amount of films I watch....The film is as the title suggests... And to this day I don't think a film has had such a deep lasting effect... in the opening scene You are thrown into narrativly unsupported act of violence... And the story unfolds... Is this how violence unfolds in 'real life' ? I honestly don't know... However if your into a diferent challenging bold realistic / experimental cinema... NOT necessarily including a 'pleasant feel good exp.. then this film fits the bill

I think there's little doubt that director Gaspar Noé goes out of his way to be deliberately provocative, mostly in his graphic sex scenes but here, in what is probably his most shocking film, with violence too. A drama told in reverse order this is an interesting cause and effect narrative that begins with an almost nauseating use of an ever moving camera, tilting at uncomfortable angles and descending into a hellish gay night club where depravity seems to be the order of the day. Disorientating and disturbing the first section of the film culminates in an act of violence that is difficult to watch and then once the viewer realises that the story is being told backwards it moves towards an extended scene of rape that defies description. One could argue this is a horror narrative draped around a relationship drama and revenge story with couple Alex (Monica Bellucci) and Marcus (Vincent Cassel) heading out to a party and taking with them Alex's ex boyfriend Pierre (Albert Dupontel). They are a strange trio indulging in conversations about sex and fulfilment with it becoming clear that Pierre is still in love with Alex. Cassel like always is a coiled spring of violence and you're never sure if he is going to explode at any minute, and here he seems intent on pushing Alex's patience with his behaviour at the party resulting in Alex leaving alone. In a nearby underpass she is brutally raped. This sets Marcus off on a revenge mission and he drags a reluctant Pierre along. It's difficult to gauge what this film is trying to say, the graphic nature especially of the rape is so impactive the film loses whatever message there is intended. Even the extended post-coital scene with Alex and Marcus in their apartment is a rather cold affair that doesn't warm you to their characters even though this comes after the rape scene. Whilst this film has garnered some critical acclaim and been lauded as courageous it's notoriety dampens it and mires it in controversy making for an experience I wouldn't want to repeat.