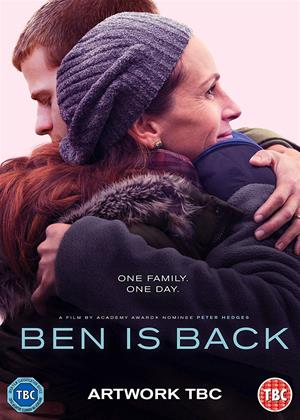 Not released
The Normal Heart

Reviews of Ben Is Back

Ben Is Back review by Mark McPherson - Cinema Paradiso

Julia Roberts is an actress who has such ease for playing that wholesome mom but she goes a bit of the extra mile in Ben is Back. The film sets her up as Holly Burns, the typical suburban mother; she has an angsty teenage girl, two younger kids she adores in her current marriage and is all about the church come Christmas time in her suburban setting. But then she arrives home and she has a visitor: Ben (Lucas Hedges). Ben is her oldest son and he has been in rehab but has decided to come home early for the holidays. She’s ecstatic at first but a part of her isn’t sure if she’s ready for her son to come back to her.

The direction of the film is rather intriguing as we’re dropped right into the contention moment without much lead-up. There is joy on Holly’s face and concern on everyone else’s. They have their suspicions of Ben and there is unease within the household. As we soon learn, Ben was at one point found on the floor with a needle in his arm, his dog is the only one to alert his parents of the overdose. But then we learn more. We catch glimpses of his past that have come back to haunt him. What started out as a mere homecoming for a warm Christmas soon turns into torture of Ben’s tragic past coming back to bite him.

Holly, ever the concerned mother, grows progressively frantic about how to proceed with being there for her son. She doesn’t want to leave him hanging out to dry and possibly relapse but is also fearful of how to keep him straight. When she can sense Ben growing nervous, she adheres to his immediate concerns to get to a meeting to keep himself clean. While at the meeting, however, Ben connects with a woman he knew years ago and she entices him with the temptation of doing drugs. Ben refuses but Holly isn’t so sure. Ben tries to keep telling her to keep calm, that he is making the right choices. But when his past starts hitting closer to home, he becomes the frustrated one, the scared one. Soon, both mother and son are fearing for their safety.

The film somewhat attempts to answer the question of how much one can move on. Can addiction be conquered when so much of our past is rooted in such dark territory? Can we pull ourselves out of the muck? More importantly, can that trust in the family be mended? Can we even still have a family? Whenever the film seems to veer too far off course into a regressive crime picture, it always pulls itself back just enough to let some of the melodrama melt so well. There’s a lot of easy family charm and a bit of a Lifetime Channel style to the drama but there’s a decent enough balance of both.

Ben is Back is a bit hard to swallow at times the way it lays the drama on thick, with a will-they-won’t-they atmosphere that isn’t as effectively written that the path to the somewhat tragic comes more like a twist than an intriguing development. That being said, the acting by Hedges and Roberts is exceptional with both actors putting forth their best effort to ensure that this melodrama is more than just that.