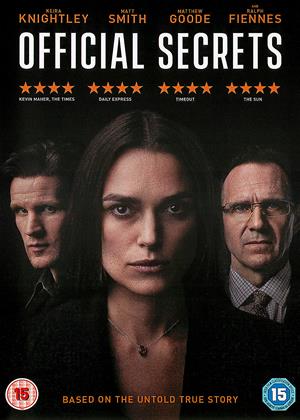 My type of film, based on a true story, and the skullduggery that a government is prepared to go to, to keep the truth away from the public and media.  The cast of very well known actors all played their roles to perfection and like all things in life there are light moments to defuse what could have been a very seriously heavy film.

Always said Tony should have been arrested and Bush impeached. Two men decide to have a war.....so they do. Not UN sanctioned so illegal. Open and shut case you would think.....many thousands of deaths later, millions of refugees, birth of Isis.......Tony on the talks circuit and one of richest men on planet, along with wife who made a fortune on fiddled property deals. Not much of an example to the kids.

Film follows the facts pretty much, so makes it even more amazing. Bit of a TV sit-com style, but well executed at a budget..........

How refreshing to watch a brilliant production based on an outstanding true story about the detection and exposure of political corruption of the highest degree. Hint: think tony Blair.

I thought this would be rather dull and with the benefit of hindsight present a rose-tinted view of events, luckily I was wrong, a quite gripping film that presents the facts succintly. Well worth a watch.

This is a really excellent film, although you know it's a true story, it gripped you all the way and with a surprise ending. Also reveals a lot about the blatant lies spun by the US and the gullibility of Blair.

Without that calamitous decision to invade Iraq for the second time probably the Middle East would be much more stable and we might not have seen the birth of ISIS.

About someone few will have heard of, but deserves to be known. The synopsis gives the details, but overall the film is excellently produced and acted and leaves us wondering what else goes on behind the scenes. The criticsm of foul language by another reviewer could apply to many TV programmes as well as films, and no doubt reflects real life - get used to it.

One to watch again - Official Secrets review by HE

I was really gripped by this film and thought it was well-scripted and acted. Keira Knightley gave a superb believable performance. Refreshing to watch a film of fairly recent events portrayed so well. One I would watch again as sometimes it is only on a second viewing that you reallly appreciate the nuances.

we really enjoyed this movie. First class, my husband said!! wow, that is praise indeed. We didn't even think about pausing for a cuppa! It held our interest all the way through. Knowing it was based on a true story made it even more thrilling; being interspersed with actual newscast really enhanced the whole production. Great that truth eventually comes out. congratulations to the producers!

Can you really trust the government? - Official Secrets review by WP

Offical Secrets is a most enthralling film from 2019. One of my favourites.

We have just played it on a DVD (from Cinema Paradiso) and considering it was a 2003 story, that was overtaken by the Iraq war, it is such a shame the story is virtually unknown. BUT this film has tremendous acting & actors and really does tell the story.

DO NOT MISS IT and if you can get the Cast & Crew interviews (they are on the DVD) run through them first! Enjoy!!!

Right on, dull and slow - Official Secrets review by EP

I was looking forward to this film as I remember the war and how controversial it was at the time. Apparently this is a true story about how the war was orchestrated by the super powers in the UN etc. It sounded intriguing but the film is slow, rather "right on" and just not interesting enough or compelling. It all feels slightly smug and self-important by Keira Knightley who I usually like and rate as an actor but she seems out of place here.

I did not get to the end of the film as it just annoyed me too much, Rhys Ifans who is also usually great in comedy roles instead here plays a dramatic part of a stateside reporter and it's just "jarring".

The right ingredients are there for a good film, but the delivery and result was sadly not a film I enjoyed...

I enjoyed it. Keira Knightley was quite believable in this role. Supporting cast was very good too. Having being out of the UK at the time of the event it was good to get another take on the events.

History is often written by the winners. What more there is to the stories of politics and war often get buried in the public record, relegated to what those in power wish to be their legacy. Thankfully, the 21st century has provided more open and accurate records of current events so we need not look too far to the past to uncover insidious secrets. Official Secrets is one such tale of how a whistleblower tried to call out the lead up to the Iraq War and went to desperate lengths to make this information public, stirred up in a dramatic docudrama.

Keira Knightley plays the whistleblower of Katharine Gun, a specialist working within British Intelligence. While working within the GCHQ, she unearths a memo that details a spy operation orchestrated by the United States of America. The goal of this spying was to obtain secret information from other nations and perhaps use that info to blackmail other nations into supporting the Iraq War. This directive from the NSA is frightening enough that Gun considers pulling the trigger on unleashing this memo to let everyone know what is really going on within national politics that will lead to war.

Knightley perfectly portrays Gun as a woman with quivering concerns about doing the right thing. She wants her revealment to remain a secret but something within her must know this will not be something she can slide under the radar without answering for. She weighs her options carefully about how to get this information out there and does so by going through journalists to make the memo known. Once her involvement is figured out, she becomes a target of treason. And in trying to get her to shut up and disavow the secrets she has unleashed, government officials start to target and discredit her. They need not merely charge her with treason as they can go after her marriage to a Muslim. Not only could she be locked up but her husband could face imprisonment as well for merely existing amid a highly charged political issue.

Director Gavin Hood brilliantly pushes the tension of this story to a believable degree without slipping into docudrama pitfalls. Matt Smith has a great presence as journalist Martin Bright, showing great interest and whispering concern. Ralph Fiennes is perfectly intimidating as British barrister Ben Emmerson, calmly trying to stress to Gun how much power his government has and how far they are willing to go to destroy her life.

Official Secrets doesn’t quite have the right gravitas to be a little more than a shocking eye-opener but it’s still a worthy and notable dissection of how corruption and fear became a driving force during a time of chaos. For being based on the book The Spy Who Tried to Stop a War; by Marcia & Thomas Mitchell, it at least does an ample job pushing more attention towards this subject that deserves notice. The aspects of government corruption and the roving racism amid terrorism should not be forgotten. Perhaps we haven’t. But just in case, here’s a not-so-friendly reminder of how troubling the world was when at war and mostly remains to this day.