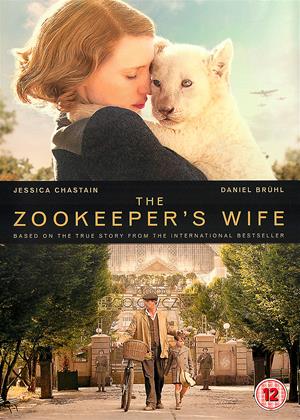 Reviews (7) of The Zookeeper's Wife

An excellent film well scripted and full of incident. Though a harrowing story from an almost unbelievable period in European history it is so well told that it is gripping to watch and a rewarding reminder of those times. Good to know it is based on actual events and to be told about subsequent events in the characters' lives. Acting very good all round. Much enjoyed.

This was a totally different angle on the fate of the Poles in World War 2. How the zookeepers managed to hide and keep safe that number of Polish Jews from under the noses of the occupiers is astounding. I'm pleased to have seen it, though I don't particularly think it is a brilliant film.

Really enjoyed this movie, what made it good was it's true story and the fact you knew good people were risking their own lives to help them. One point I didn't get was when Germany occupied in other countries they used to also occupy the building so it made it bum on seat waiting for them to find the Jewish people hiding. Overall I enjoyed this movie to watch it twice,. The sound quality when they spoke wasn't too good then you'd turn volume up them the fighting gun fire boomed out so volume down again. Still I will recommend you to watch this movie

Very lightweight and unmoving. Bearing in mind her impressive CV, I find it hard to believe that Jessica Chastain would involve herself in what is no more than a B picture. The real story behind this is quite amazing and this does it no justice at all.

OK But Not Great - The Zookeeper's Wife review by JP

Having seen more than my share of Holocaust and WWII movies in my very long lifetime, I would say that Zookeeper's Wife is in the middle of the pack somewhere. It's certainly not a bad film, although some of the scenes made no sense and weren't historically very accurate. I had trouble understanding the Polish accent that Chastain attempted, but that's what subtitles are good for.

The acting is very good throughout and there is enough suspense to keep one involved. Why the Germans required so many soldiers to be present at the demolished zoo for the time of their stay in Warsaw was something I didn't understand. And why when the wife is leaving Warsaw with her son, is not her baby daughter with them? No explanation is given.

A good reminder of what happened not that long ago.

Given that this s true story with the subject matter, this really should have been a compelling story, but unfortunately it was dull and boring. I just lost interest really early on, and I'm annoyed at myself, because I really did want to enjoy this. Shame.

Too upsetting...... - The Zookeeper's Wife review by JB

I don't know if it is just me, but the subject matter combined with the time it was set in, was a gut wrencher waiting to happen. Horrid scenes of animals being killed and bombed, and Nazis everywhere. I gave it about half an hour and then gave up. Also Jessica Chastain speaks in such an incoherent squeaky accent, that it is very hard to hear and understand what she is saying. Altogether a disaster!!