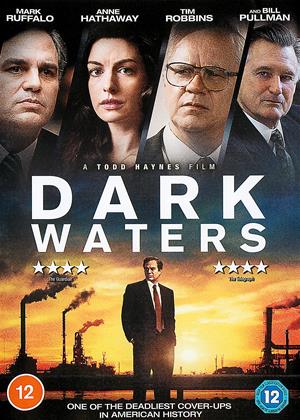 A must see film ! - Dark Waters review by HB

I have never been a fan of Mark Ruffalo but by the end of this film I could not have imagined anyone else in the role. It is a slow burner of a tale which happens to shockingly true. I would advise everyone to watch it just to get educated in the price paid for not having to scrub your pans. I threw out my expensive non stick pans after watching this even though one of the type of chemicals Used to make Teflon is now banned. The film does do a lot of scene setting before it gets going but bear with it and you will become gripped by the whole affair.

As good as Erin Brockovich - Dark Waters review by CB

I had wondered if this would be a 'poor man's Erin Brockovich' (i.e. similar theme but just not as good). However, I found it compelling viewing and it has stayed with me since I watched it - always one of my main pointers to a good film. The three bonus shorts on the making of the film are fascinating, particularly the one about the real people who featured in the film (either as themselves or as cameos). The story is both a cautionary tale of the misuse of corporate power but also a reminder of the sacrifice that is sometimes associated with doing 'a good thing' (as Rob Bilott's tenacious actions over 15 years or so are described towards the end of the film).

Amazing and frightening Class Action against  DuPont , a true story .

Mark Ruffalo and Tim Robbins are excellent and the story unfolds slowly, but keeps you rooting for “the little guys”.

A story that had to be told, and I hope many people will watch and learn ...... to hope it never happens again.

InterestIng extras too, including  interviews with many of the real- life characters from the movie.

Loved this film, especially when it was based on a true story. Great acting by Mark Ruffalo Anne Hathaway and Tim Robins. All the more poignant when real people affected by big business had cameo roles on the film.

Loved this film! A great story of the incredibly drawn out legal process involved in uncovering Dupont's very real Teflon cover-up and criminal negligence. The tenacity of the lawyer who went after DuPont - to the detriment of his own personal life - was astounding and so well portrayed. They really did try every trick in the book to wriggle out of their responsibilities to care for hundreds of people who suffered terrible diseases or worse after being exposed to Teflon by-products (either in the manufacturing plant or in the landfills where Dupont dumped their highly toxic sludge). Great performances by Mark Ruffalo, Anne Hathway and Tim Robbins, and we particularly enjoyed the guest appearances from the real-life people involved in this story. A solid film about the lengths that some corporate industries will go to to hide the truth - an issue that more people need to be aware of! If you liked Erin Brockovich, you will love this film. Highly recommended.

How do they sleep at night - Dark Waters review by JB

Hard to believe this is a true story.One man investigated it and thank god he did . Another example of big business valueing money over peoples lives .I dont know how these people sleep at night badly I hope .JB

This is no Erin Brockovich - Dark Waters review by JH

This film has lots of potential - an engaging storyline (which happens to be true), decent actors and a message that is relevant to all of us today. So what makes it worthy of one star?

The script is wooden, the directing is strange to say the least - lots of sequences spliced together with little thought for continuity, and the entire film has a depressing grey-yellow cast to it. Because the film takes place over quite a long time-period the director has chosen to punctuate the story with black screens stating the date we have now reached. This is in one sense helpful, but I confess that towards the end of the film I began to wish that each black screen would be the last.

I am not sure what would redeem this film for me - certainly the acting talents of Mark Ruffalo and Anne Hathaway were not sufficient to do it, nor the appearances of some well-loved acting names from the past. I think in other hands this story could have been just as lively and engaging as Erin Brokovich, but it just isn't.

Director Todd Haynes is known for his immaculately crafted films like Carol, and Wonderstruck, but on this occasion he allows his story and the actors to do all the heavy lifting. Mark Ruffalo plays a lawyer who uncovers environmental foul play by one of the USA's largest and most powerful chemical producing companies, DuPont - the makers of Teflon. Proving that the company are behind the deaths of workers, locals, and cattle in the area surrounding their Parkersburg, West Virginia plant due to the way it disposes of hazardous waste in the land is the task. It's very interesting material but it's not cinematic. When the drama is sexed-up, like a charging bull and some grandstanding speeches, the film feels forced but the film needs this to be relatable - it's in the quieter moments that the film comes into its own. It's depressing how big business always outsteps moral duty to secure profit, and this film nails some hard truths with aplomb. However, a documentary would have been much more satisfying as you suspect that even the filmmakers have been compromised when getting the full story to the screen. PS: WTF was going on in the wardrobe department? This film has bad fitting wigs and ill-fitted clothes for miles... and what the hell is going on with Bill Camp's fake eyebrows? He looks like he got dressed on Sesame Street.

The fact that this is a true story made it all the more poignant. We thought it was very well acted and it kept us engaged all the way through.

A very watchable film. A true story of one mans 20 year fight to get justice for ordinary people being water poisoned by the

polluting waste of a big corporation. Shows what companies can do to avoid their responsibilities when they have unlimited funds.

It also show shows what fortitude some have to keep going when the odds are against,them. It also educates us to the chemicals

that are in products we use everyday.....amazing and worrying.

Lovely to see Tim Robbins albeit in a small role.

Definitely worth 2 hours of your time

Dark Waters follows in a long series of legal dramas about a truth-seeker trying to bring justice to an unjust world. In this case, Mark Ruffalo plays Ohio attorney Robert Billott in a battle against the DuPont company for their dumping of toxic waste into West Virginia. Todd Haynes directs and gives us more or less what the audience seeks out of such a tale. It’s intriguing, frustrating, agonizing, and ultimately leaves us tired of the corrupt system, almost as savaged as Ruffalo by the time the credits roll.

Billot is established as an attorney for a firm that represents DuPont. He doesn’t think much of it until he starts helping out on a farm in West Virginia and notices something odd. The cows are getting worse as they grow sick and die. A DuPont poisoning seems to be the culprit given the toxic water supply. Noticing is easy but proving this case is a whole other level of seeking justice.

Ruffalo very much plays the underdog in this story, constantly feeling low and lacking in enough power to bring about real change in the world. He even seems to be depicted as being below others in how the film is shot, giving a grand sense of scale to the mountain his character has to conquer. Compare his stature to that of his boss played by Tim Robbins who seems to cast a dark shadow over him, representing the towering nature of business being too much for one man to topple.

Dark Waters takes its sweet time but slowly envelopes the audience by digging deeper into the more startling information behind DuPont’s chemical dumping. It’s not just that it drives cows to the brink of death but that it brings about a much harmful effect for humans. The toxic chemicals enter the body and remain there, leading to some horrifying implications. It’s all the more depressing knowing this is true, the material ripped from a New York Times story.

It’s for this reason that it’s a bit more depressing to note that Dark Waters doesn’t exactly tread into the deep end of this genre of filmmaking. We’ve seen films like this before but as time has shown, it takes little more a mildly rousing investigation liberally grazed with true corruption. The film was executive produced by Ruffalo who is himself an environmental activist. He delivers a fine performance and brings across many of these troubling issues with great passion, much akin to other fervent legal dramas that come branded with a harrowing and insightful monologue. But it never quite breaks out of that shell of being compelling enough to be entertaining, yet routine enough to not inspire as largely as it should.

Dark Waters clearly has a great rage bubbling under its surface and while some of it rises, most of it feels held back in a rather by-the-numbers legal drama. The film is perhaps more unique as a commentary on the monotony of it all, how the fight for what’s right is a long road filled with paperwork and paranoia. It’s an intriguing commentary that I can only hope more audiences will notice past the fine performances.