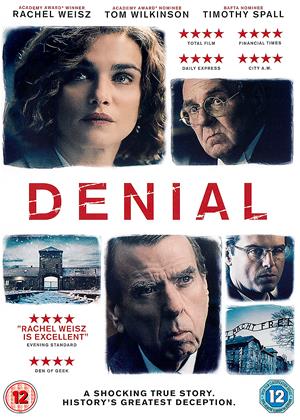 I love a good story, a drama based on real events. David Irving, the Nazi sympathiser “historian” took the American university lecturer and author Deborah Lipstadt to court because of comments she had made in her book about Holocaust deniers. She called him a liar. The movie is a co production of US and UK and because much of the law and trial procedure are so different, time was devoted to explain the law to US viewers. The movie takes you to Auschwitz so that the barrister played by Tom Wilkinson can do research to build the defense. Rachel Weisz does an excellent job playing against type to capture the brilliant but abrupt and feisty NY author. Timothy Spall as David Irving creates the vile hateful self righteous Holocaust denier who delights in speaking to rabid neo Nazi crowds. In a time when sadly and bewilderingly there are still fascists, , Holocaust deniers and anti Semites, this is an important movie. I gave it 5 stars because it is a movie that made me think and is educational plus I loved that the true story is that the judge found in favour of Deborah Lipstadt.

I expected to enjoy this movie but found it disappointing and, frankly, annoying.

For a start, the constant moaning about the British legal system was unnecessary.

Timothy Spall gives a cartoon impression of David Irving. The most interesting character is the barrister played by Tom Wilkinson.

Don't think much really of Rachael W in the main role and lots of twaddle re Boudicca.

I knew the story anyway - yet my belief in freedom of speech makes me always side with anyone ever expressing a view.

So, passable but 2 stars.

This should have been really good - a fine cast, a controversial real-life story to draw upon and of course the weight of the subject matter behind it. But it isn't, and DENIAL falls into the same bracket as SCHINDLER'S LIST as praised for being about the Holocaust than being a riveting drama. It establishes David Irving as the 'villain' quite early and then never adds any nuance to his character, albeit he's a good grandfather. It then proceeds to break him down over the course of the film, deservedly so no doubt and yet just inviting the audience to boo and hiss alongside the virtuous legal team assembled on the side of Deborah Lipstadt. The overriding sense is one of laziness, coasting, trading on the fact it's a Holocaust drama, and that's it. The talent involved deserved a lot better. Still, Tom Wilkinson is good and Timothy Spall can do this stuff in his sleep and still be compelling.

An important subject & a strong cast. Tricky to turn a trial - with its inevitably narrow focus - into an absorbing drama. But, for the most part, it works well. Certainly worth watching.

You don't need me to tell you the story here; the trailer and previous reviews adequately outline what's going on.

We returned from a trip to Berlin and found this in our letter box which was fortuitous especially after learning more about the holocaust whilst visiting the different museums and memorials on our trip to Germany's capital.

it's absurd that the likes of the odious Irving and his ilk deny the holocaust ever happened as the evidence is there for all to see but it makes for an interesting and "worthy" premise.

Most trial movies quickly become tedious but "Denial" manages to balance the inevitable legalities and drama well without losing our interest. I'm not sure what the references to Boudica were meant to symbolise considering she was seemingly responsible for the killing of an estimated 80,000 Romans and British and then became known as a British folk hero; though her statue near parliament got a good polish for the movie so that's something.

Despite some obvious signposting and downright silly moments, "Denial" is an interesting movie and the principal actors all play their parts well with both Spall and Wilkinson putting in excellent performances and Weisz plays against type and acquits herself.

All in all a good watch and you'll also probably learn something too.

Something as important as this subject matter should shock you to the core . Unfortunately this is just a worthy film rather than an emotional experience. Of course the acting ,script etc are fine but where is the real horror. Irving is evil but I don’t think this is fully realised

The film has a good cast and deals with an important, if slightly complicated, subject. I thought Rachel Weisz was good in the main part and helped bring out one of the themes of the film: how Lipstadt's very direct American approach clashed with the much more cautious and methodical British legal system. The film is less helpful on how exactly David Irving transgressed and why (spoiler) he lost the libel action. An intelligent and enjoyable film, none the less.

Interesting film which highlights the atrocities of the past. Excellent acting which draws you into the situation and highlights that sometimes less is more to get to the truth and arrive at the correct outcome. Riveting stuff.