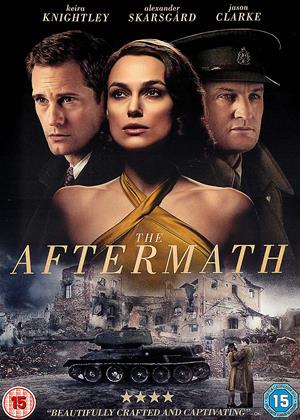 Reviews (4) of The Aftermath

This movie shows WHY most films take place DURING a war and not in the stunned uneventful aftermath - because NOTHING HAPPENS, basically - apart from the over-rated eye-candy-cast Keira Knightly swooning and blubbing. Her transatlantic posho public school accent is cringe-worthy - people did NOT talk like that in 1946. They pronounced the T's in BeTTer; they did not say 'BeDDer' like modern posh totty who went to Bedales and Rodean. Totally miscast. Knightly is only a successful actress coz of her looks NOT her acting talent. That shows here.

The rest of this movie is SO SLOW I looked at my watch generally during it. The characters are so two dimensional you just do not care if they live or die - which rather undermines dramatic tension, Keira Knightly is SO irritating I half expected the 2 men she's playing with to do her in. I might have cheered then and woken up!

SO much CGI here - all the ruins of Hamburg. Probably works better in the novel. No mention here that the main characters are supposed to be Welsh )albeit posh Welsh without accents) - in fact, Keir's tedious irritating character calls her husband SO ENGLISH at one point.

The most interesting characters are the teenage daughter and the 88 nazi kids yet that is SO under-developed, sadly.

The best thing about this movie is the magnificent house - a real Austro-Hungarian beauty in the Czech Republic. The plot and characters were so boring I spent a lot of time antique-spotting in the décor! That's how tedious this misfiring miscast film is.

To be honest, if you want to watch this movie just watch the trailer - that shows all the eventful bits and leaves out the 90 minutes of tedium love triangle gushing in between. This is probably a women's movie - but it isn't a patch on Catherine Cookson or other romantic stories.

This is Mills & Boon amongst the ruins, Only for hardcore costume drama fans. I see ROTTEN TOMATOES gives this film 23%. I tend to agree. BUT maybe if I were a woman wanting emo-porn and a gushing Mills & Boon story, I'd like it more.

2 hours of my life I'm never getting back.

Won the War, Lost the Peace - The Aftermath review by JD

Hated this movie. Yes the sets are nice and war torn Hamburg looks good, but the story was ridiculous.

The Germans, even the Nazis are the good guys, the Brits the bad guys.

No mention of all the atrocities the Germans did to the U.K., just how awful the Allies had been to bomb Germany.

Films like this, written by Lilly livered Liberals explain how we Won the War, and Lost the Peace.

It also explains why the Brits voted for Brexit, and not to be dictated to by a Europe that would not exist in its present form if the Allies had not stood up to Hitler.

The script is awful.

Wasnt like I expected - The Aftermath review by RV

It was not as good as I expected. So I was little disappointed. I became after 30 minutes in to the movie.

This was very much worth watching for the impressions of life in devastated Hamburg immediately post war. This was very well done, and I have no idea how all the devastation was created on the sets. One thing I did notice was how useless and self centred the star and her friends were. Her husband was dealing with mass riots, with killers aroung, and people were trying to take his life. She was complaining about the style of the house! However I'm sure this was not the impression I was supposed to take away from the film.

Aftermath is a post-WWII drama that feels as though it’s trying to ring out every lingering last drop of national tension. Reduced to the nooks of Hamburg’s populace during the reconstruction, this is a weary wandering of trying to find a way out of a troubled past and into a new future. Despite some admirable performances, this picture doesn’t dig up anything all that profound that hasn’t already been explored in previously quiet films of a very tense time following the war.

It’s 1946 and Rachael Morgan (Kiera Knightley) has come to Hamburg for her husband, the English Colonel Lewis (Jason Clarke). His task of rebuilding Germany in its postwar state is not going particularly well considering the issues of Nazi insurgents fighting back. As they reunite during the cold winter months, they’ve become bitter over losing their son during the blitz and now having to reside in a house with German guests. The guests of architect Stefan Lubert and his teenage daughter Freda Lubert. Though Lewis seems content to let them stay in the attic, Rachel is less than thrilled. This distaste is easy enough to see considering how Lewis has spent enough time among the Germans after the war for the othering nature of the events to have subsided. But for a woman who only knew Germans from who they have killed, the thought of being in the same house as a German is infuriating.

But since the postwar clean up is going slow as the Nazis are slowly flushed out, there’s time for understanding when the bombings have ceased. Over time, Rachel connects with Stefan as they have quite a bit in common. In particular, Stefan lost his wife during an Allied bombing. They connect well. Too well. To the point of having an affair. And with the questioning of Stefan still being on the side of the Nazis, there’s a swirling of war and love stirred with a spoon of melodrama, a peppering of murder as well.

This is a film that becomes somewhat frustrating in what seems to start off as an anti-war drama and then transforms itself into one more concerned with affairs and alliances. As the film progresses, there’s less concern over how European relations will continue and more of a bitter will-they-won’t-they drama meant to be a little more steamy than intriguing. And perhaps that was the intent with such a picture but when it starts with such lofty aspirations and merely dashes them intensity, there’s a bitterness to the picture in all the worst ways.

Aftermath has less to say about the war and more to say about Kiera Knightley can weasel her way into a period piece that borders on soap opera with a dreary touch. Of the many postwar dramas out there, this one certainly has some strong performances and a few surprises here and there. But surely there’s more to the postwar reconstruction than a somber romance of love triangles most tragic. From another perspective, one could look at the film as an example of how reconstructing the region will take far more than bricks to rebuild, that it’ll also take a love that has yet to meld back into the country. Of course, that all depends on how much of that you can see in a picture that has a strange death by icy waters.