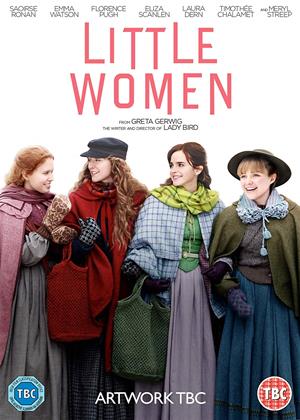 Greta Gerwig appeared as such a natural choice for directing Little Women. With her previous picture of Lady Bird being one of the strongest coming of age female films of the decade, her ease of comedy and drama with a young cast was well suited for such a story. She even brings along her Lady Bird stars of Saorise Ronan and Timothy Chalamet to play just the right parts. Sure enough, she delivers a charming adaptation worthy of the warm ensemble in the 1994 film.

The story remains relatively the same with a brilliant nonlinear format. We initially catch with the four sisters of the March after most of them have gone onto live their lives. Jo (Ronan) struggles to work as a writer in New York. Meanwhile, in Paris, Amy (Florence Pugh) is studying painting with her grumpy Aunt March (Meryl Streep). Meg (Emma Watson) is feeling the somberness of raising a family and poor Beth (Eliza Scanlen) is ill once more. How did they all get here? The film answers these questions amid a homecoming where we both their juvenile past and adulthood present.

Though tightly edited to give us a sense of time and keep up the pacing, there’s a lot of room left to love and get to know the characters. Most of the running time is reserved for the likes of the girls just chatting and having fun amid writing plays and bickering about boys. Though all four women are fantastic, I must admit that Pugh stands out greatly for having such an effortless means of comical commentary and a sneer towards nearly everything. Watson has a particular grace for a woman who seems somewhat destined for greatness but expects so much of it that her issues have more to do with expectations of love versus riches. For as little as we get of Scanlen as Beth, she does well as a woman trying to come to terms with herself and others when they don’t feel ready to move on.

Of course, the star of the show is Ronan, harboring such determination and emotion in every aspect of family, finance, and love. When she finds herself smitten with Laurie (Timothée Chalamet), their private dancing amid an intimidating party is so adorable. They have a conflicting nature in trying to decide if they will or will not tie the not. There’s a lot of pressure within the family when Amy has already married and Beth is not long for this world. The likes of Aunt March don’t help and all that the matriarch of the household Marmee (Laura Dern) can offer is a mere understanding hug and some support to keep going, wherever the destination will be.

Most intriguing is how Gerwig stages that past and present of these women. In the past, everything feels warm and sincere, the orange glow of the fireplace and candles feeling comforting and refreshing. Skip to the present and the atmosphere is much different, even within the same household. Things are cooler and darker, a gloom placed over places that once seemed bright and fun. Somewhere towards the end, there’s a balance, where glimmers of beauty pierce through the trees to find the allure in life being an unpredictable ride.

Mix in some fine supporting performances from the likes Bob Odenkirk as the smiling father and Chris Cooper as the charitable elite neighbor and you have one all-encompassing bit of a wondrous period drama. Though never fully embracing a more feminist-leaning, which seems to only have a mild amount of room to explore in such a tale of women railing against times that seem to forget about them, there’s great humanity within such projections of these literary characters. It’s a picture that never feels as though it trumps the 1994 picture but feels just as inviting as a holiday treat worth returning to. In other words, Greta gives great grandoise to Little Women.