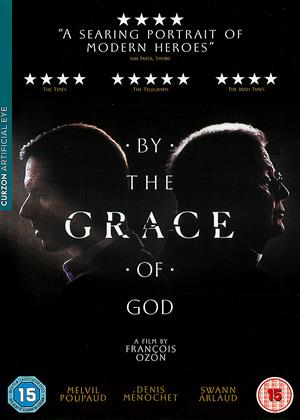 Synopsis:
Francois Ozon's gripping true-life drama tells the story of three men who come together to dismantle the code of silence around historic abuse cases within the Catholic Church. Alexandre (Melville Poupaud) lives in Lyon with his wife and children. One day he learns by chance that the priest who abused him when he was in scouts is still working with children. He decides to take action and is soon joined by two other victims of the priest. Francois (Denis Menochet) and Emmanuel (Swann Arlaud). They band together to "lift the burden of silence" surrounding their ordeal. But the repercussions and consequences will leave no one unscathed.
Based on events from the 2019 conviction of Cardinal Philippe Barbarin of Lyon for concealing the conduct of Father Bernard Preynat, 'By the Grace of God ' is an urgent portrait of resistance.
Actors:
Melvil Poupaud, Denis Ménochet, Swann Arlaud, Éric Caravaca, François Marthouret, Bernard Verley, Josiane Balasko, Martine Erhel, Hélène Vincent, François Chattot, Frédéric Pierrot, Aurélia Petit, Julie Duclos, Jeanne Rosa, Amélie Daure, Nicolas Bridet, Pierre Lottin, Fejria Deliba, Baya Rehaz, Stéphane Brel
Directors:
François Ozon
Producers:
Eric Altmayer, Nicolas Altmayer
Writers:
François Ozon
Aka:
Grâce à Dieu
Studio:
Curzon / Artificial Eye
Genres:
Drama
Countries:
France, Drama
Awards:

Rent other films like By the Grace of God

Reviews (5) of By the Grace of God

A very thoughtful film covering the breaking of the code of silence that had shrouded the Catholic Church for years with regard to illegal sex with under aged boys.  Very thoughtfully told, but at the same getting the message across of what actually was happening, and how a group of victims got together to expose the scandal and rock the Catholic Church.

The great, prolific and incredibly versatile writer director Francois Ozon turns his attention to the real life case of Father Bernard Preynat, a Catholic priest who is accused of sexually assaulting countless young boys from the 1980s onwards. And, what's more, the Church has known about it for years.

By the Grace of God has an almost episodic structure: it starts with the case of Alexandre (Melvil Poupaud) a family man living in Lyon, and still a practicing Catholic. He goes to the church to seek some sort of closure after he's ready to talk about the assault he suffered from Preynat. At the same time, in other parts of the country, two very different and separate men are starting to come forward including Francois (Denis Menochet) and Emmanuel (Swann Arlaud). They join up forces, after conversations with the church break down, to seek justice.

There are obvious comparisons with the movie Spotlight, covering a similar topic but in the US. However, that had a narrative focus and tension, driven by the investigative journalist team at the centre of the story, that this movie arguably lacks especially with its open ended conclusion (that has now been resolved). But this movie works better on a human level, as we're much closer to the victims here and we can see how the emotional, psychological, physical and even spiritual aftermath of the abuse manifests in very different ways.

I did wonder whether the stories would have worked better as a longer form TV mini series than a two hour film. Ozon clearly and rightly wants to unpick the ongoing human consequences of historic abuse. But by cramming three very different stories in one movie, he is perhaps doing a disservice to each one. His fractured narrative presentation does not help either. A thoughtful and thought provoking film for sure, but not an entirely successful one.

Authentically appalling - By the Grace of God review by JT

French drama schools must be very different from British or American ones. This film has the ring of truth throughout and not a whiff of "people doing acting" which makes its bleak message all the more awful. The fact that neither of the main perpetrators was ever punished must leave the complainants feeling pretty sick. I will make a point now of watching Spotlight, which I gather tells a similar story of abuse and cover-up by the church hierarchy.

The focus was on the victim's attempts to reconcile their personal experience with their faith.

It also set out the Church's response, to look after and forgive the perpetrator.

However, for those of us who are not Catholic, the film is interesting for what it did not cover: the legal or state's response, the lack of child focus of state and Church, the lack of consequences for actions, the lack of lessons learned.

As a non Catholic, I couldn't fathom why. Maybe you need to be Catholic to to understand that.

Excellent docudrama - By the Grace of God review by BS