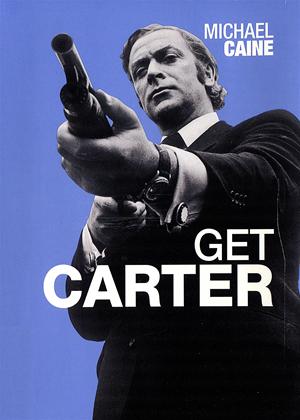 Reviews (3) of Get Carter

Michael Caine plays Jack Carter, a London gangster who comes to Newcastle to investigate - and then avenge - the death of his brother. Caine's character is hard and uncompromising as he wreaks vengeance on all around. The only emotion he shows is when he sees what has been done to his niece (?daughter?).

With gritty locations, gritty characters and a gritty story, I remembered the film as shot in black and white. It is in fact in colour - but back and white is still how I see it, so bleak is the storyline.

The acting is excellent. It's certainly one of Caine's best roles, and the boss baddy (Kinnear) is well played by the renowned playwright John Osborne.

The film is now some 40 years old and yet it doesn't seem dated. Certainly there isn't the bloodiness of more recent gangster films, but the tension builds throughout helped by Caine's portrayal of a cold, relentless, ruthless man. The ending is unexpected (and I won't spoil it here), but well in keeping with the bleakness of the film.

'Get Carter' is a classic amongst British gangster films. 5/5 stars - highly recommended.

Get 'Get Carter' - Get Carter review by PLUTO

Unsurprisingly, this movie still feels up to date. Convincingly portrays the underbelly of society, heartless, utterly selfish, take what you want from other non-violent "softies", and give them a severe kicking if they objector resist.

amorality always disbelieves in having payback drop onto them. Carter's contempt hits back at him devastatingly.

Great and prescient film from almost 50 years ago now. It wouldn't have passed the censors in previous decades; Michael Caine said the reason he liked the script was that it didn't treat villians in the traditional British cinematic way, i.e. as a kind of joke. He knew from his background that they were very far from that.

What else was new in the film was its matter-of-fact depiction of a society whare corruption is endemic. Nowadays we take that for granted, but back then Dixon Of Dock Green was on TV and people's blinkers were firmly in place.

Yet I never really bought the ending and that is why 4*, not 5.

As to the Blu-ray, it gets rid of the absurd Dick van Dyke Cockney voices in the opening scene and pictorially it's some improvement on the DVD for sure but I wonder if a 4k restoration is in the offing? In a couple of years I'd be interested in that.

But still the best British crime drama ever.