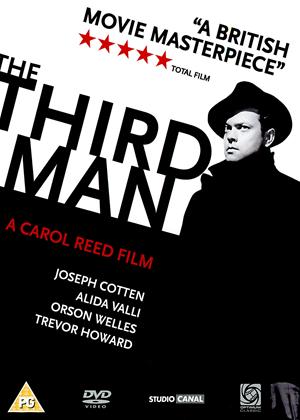 Reviews (2) of The Third Man

Voted the best British film of them all by the BFI. Salutes to Carol Reed's direction, Graham Greene's thrilling but melancholy script, Robert Krasker's outstanding expressionist photography, and among a great cast, an iconic performance by Orson Welles as Harry Lime, unscrupulous trafficker in the rubble of post war Vienna, the city divided between the four allied powers.

While the film is extremely suspenseful, we never lose touch with the real sorrow of a people destroyed by war, living under occupation. And this being a work of Graham Greene, there are fascinating moral complexities to agonise over.

When a film is is as good as this is, on every level, the only reasonable response is to be overwhelmed.

Outstanding for its time - The Third Man review by JD

For a 1949 film it is a masterpiece. It richly deserves to have won the cinematography award. I do not think modern cinematography is better, it has just got a few more tricks. The style of acting has since changed alot and mainly for the good. It is very theatrical and projected especially Orson who sometimes looks as though he is doing Bob Hope impressions. Well worth a nostalgic trip.