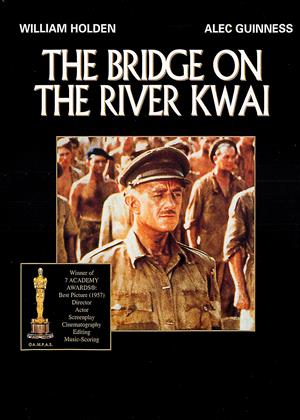 Rent other films like The Bridge on the River Kwai

Reviews (2) of The Bridge on the River Kwai

This is an absolute classic cracker. It is typical 1957 stuff. A bit "stiff upper lip chaps" and slightly swaggering acting but I defy anyone not to feel the need to whistle colonel bogey and feel a warm glow of unfounded optimism. The whole feel is different to modern cinema, I felt much more character to this film and a less calculated progression of the plot. You might need a cold one standing by; the tropical heat is tangible.

An excellent film which, sadly, is a complete travesty of the historical truth - The Bridge on the River Kwai review by Philip in Paradiso

This is a classic and an excellent film: as war movies go, it is superb and I did enjoy watching it (all 2 1/2 hours of it). The style, atmosphere, acting, plot, etc. -- none of that, in my view, feels stale, and that is saying something, as the film was made in the mid-1950s. So, I recommend it if you have not seen it.

I had seen bits and pieces of it, but never the whole movie. I expected it to depict the atrocities committed by the Japanese at the expense of British and other POWs, and the stiff upper lip to prevail in the end. In fact, the inhumane treatment of the prisoners is shown, but rather downplayed. I do not think it gives a realistic idea of the conditions in the camps along the railway line. But the film is not really about that. Without spoiling the story for those who don't know it, it is about a personal tussle between 2 men, as stubborn one as the other: a British officer (Alec Guinness) and the Japanese officer in charge of the camp (Sessue Hayakawa).

The problem is that, good as it is, the film is based on the novel by a Frenchman, Pierre Boulle, and the novel's storyline has little to do with the actual events. Alec Guinness's colonel is modelled on Brigadier Sir Philip John Denton Toosey (1904 – 1975), who was, by any yardstick, an utterly remarkable man and a soldier of impeccable standing. All of this is explained on Wikipedia (to be read after you have watched the film).

Understandably, when the film came out, the British veterans, who had suffered so much because of the cruelty of the Japanese, and may have served under Brig D Toosey, were outraged. So, enjoy the film, but remember that the actual historical facts have nothing to do with it. It would be great if there was, one day, a movie telling what Brig D Toosey actually did and who he was. (The truth has been put forward in various TV documentaries and books since written about the construction of the railway line, etc.)