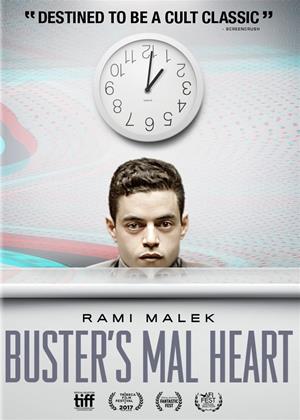 Synopsis:
In this bold thriller peppered with dark humor and interlocking mystery, an eccentric mountain man is on the run from the authorities, surviving the winter by breaking into empty vacation homes in a remote community. Regularly calling into radio talk shows - where he has acquired the nickname "Buster" - to rant about the impending Inversion at the turn of the millennium, he is haunted by visions of being lost at sea, and memories of his former life as a family man.
As he drifts from house to house, eluding the local sheriff at every turn, we gradually piece together the events that fractured his life and left him alone on top of a snowy mountain, or perhaps in a small rowboat in the middle of a vast ocean - or both, in this visceral mind bender that will provoke discussion long after it turns your world upside-down.
Actors:
Rami Malek, DJ Qualls, Kate Lyn Sheil, Sukha Belle Potter, Toby Huss, Lin Shaye, Mark Kelly, Bruce Bundy, Teresa Yenque, Jared Larson, Sandra Ellis Lafferty, Nicholas Pryor, R.J. Burns, Gabriel Clark, Lily Gladstone, Chris Torma, Shi Ne Nielson, Ricky Hartung, Tom Cordingley, Franklin Ruehl
Directors:
Sarah Adina Smith
Voiced By:
Nick Knudsen, Greg Behrendt, Kate Berlant, Jennifer Lafleur, Ross Partridge, Haroula Rose
Genres:
Drama, Thrillers

Not released
The Time Being

Not released
Answers to Nothing

Not released
Winter in the Blood

Not released
Men Go to Battle

Not released
The Off Hours

There are three stories at play in the non-linear tale of Buster (Rami Malek). There’s Buster the family man, drudging through his night shift job and desperate to get his family off the grid. There’s Buster the romaer, a bearded weirdo that lives off the scraps of unoccupied vacation home. And there’s Buster the religious, hoping he’ll receive some sign as he is lost at sea. All three of these versions of Buster will collide in the end, but all they build up to is a whole lot of weird and not a lot of substance.

There is certainly a lot of character present in Malek as he inhabits the strange and shifting role of the titular lead. He has the perfect mannerisms of a father trying to do good for his daughter, a husband struggling to be a provider for his wife and an employee who has seen plenty of sleepless nights behind a dreary desk. I’m not sure if he really does have those massive bags under his eyes or if the makeup was that good, but he looks the part well. I could feel the tiredness on his face and the nihilism in his heart for working such a dead-end job. It makes his fascination the paranoia of the coming year 2000 a little more relatable, up until the point where he loses all sanity, of course.

Night after night brings about further viewings of a public access program on his lunch breaks about an upcoming inversion of dimensions. It’s a nutty broadcast, made all the more nuttier for being presented by real-life conspiracy theorist Dr. Franklin Ruehl, but with so much seeming to be wrong with Buster’s life, the theory starts slowly becoming more acceptable. Further fanning the flames of crazy is a computer programmer played by DJ Qualls, ambling by every night to indulge Buster about how flawed the system is and how easily it will go down come New Year’s Eve. Life becomes progressively more tough as Buster soon finds himself running out of time for his family, money for their escape and lack of knowledge to live independently.

While this is happening, a much stranger and more amusing picture takes place in Buster’s near future as a bearded wanderer. His desire to escape into the realm of reality for believed inversion is rather humorous in how sure he is that something big is coming. While he waits, Buster bides his time by crank calling radio stations, breaking into vacation homes, drawing inversion symbols on the wall and pooping in crockpots. For being the height of his madness, it’s the most silly part of the film just for how much crazy he embraces. Sure, it may be inappropriate to laugh at such insanity, but how could you not when he calls up a phone sex line just so he can scream about a dimensional inversion?

The third and shortest aspect of the film is Buster’s final hour while on a boat. Silent and nihilistic, he seeks some sort of sign in the desolate ocean, be it spiritual or from the stars. Memories begin to fade in and out of his mind, leading to the bigger questions about Buster’s mind. Is the lost at sea segment the last part of his life or the second? Did he really split himself into to two selves or is that just in his mind? How much of each story is real?

Yes yes, these are interesting questions to ponder, but do they all lead towards? The movie asks us to spend so much time deciphering Buster’s own psyche it forgets to ask what significance any of this has. I wouldn’t question such direction if the film didn’t bring up such heavy material. Throughout the picture is Buster’s distaste for the capitalist machine, but his hatred towards it comes off more as rantings than commentary. There are points to be made against it with Buster’s helplessness for having an overnight job, but there are several that knock his theories down when he argues with his wife about his plans. She becomes brutally honest when she brings up how Buster wants to live off the land, but doesn’t know the first thing about farming. He hasn’t thought this through and something tells me this story had the same amount of ill focus.

Despite some solid scenes tonal shifts for a man losing his mind, there’s a slight emptiness where the mystery of Buster trumps the themes of trials. Some of this aimlessness made sense when I discovered the director and screenwriter was Sarah Adina Smith. Much like her meandering apocalypse film Goodbye, World, this is a film that seems to have a lot to say, but none of the right words to get there. It has the potential to be a commentary on a flawed society and our obsession with finding more, but in the hands of Adina Smith, it comes off as the incoherent babblings of a madman on the corner. And like any crazy hobo that rambles about our flawed existence, the characters holds more attention than the message.