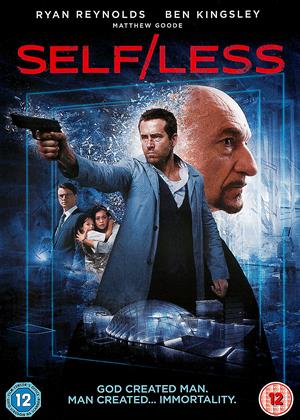 Tarsem Singh has made some of the most beautiful films ever to hit the cinema screen. The Fall was sheer visual poetry. Here he turns his hand to a thriller and the result is engrossing.

When the consciousness of the dying Ben Kingsley is transferred into Ryan Reynolds’ body, you know there’s going to be a catch. He discovers the body has unexpected skills, like Jason Bourne’s, and this leads to a fun ride with plenty of action and intrigue as he investigates the mystery.

Singh’s own screenplays sometimes lack focus and punch, but given the well-honed material here he produces an anti-Greengrass-shakycam psychological thriller that’s as smooth as silk and a joy to watch. Get on board for the ride.

Since Ghandi Ben has done many strong characters, and here is another. Sexy Beast must rate as number one for sure. Supposed to have his persona in Bryan, but Bryan is too nice to be Ben, if get my drift, but rolls along quite well.

Ryan Reynolds and Ben Kingsley share a common bond as both actors and characters in Self/Less. They’re both good actors, but have rarely been given a solid movie to showcase these traits. They’re both unique characters, but reduced to simple puppets in a script more focused on its plot than its characters. I pitied the movie because I want to admire its casting and its premise which could have been rather engaging. But director Tarsem Singh manages to hit every wrong note on this misguided science fiction/action picture.

Everything starts off interesting enough with Kingsley playing dying millionaire Damian. Facing cancer, Damian becomes intrigued by Professor Albright (Matthew Goode) and his scientific experiment of “shedding.” The process involves transferring the consciousness out of your body and into another. The secret catch is that the other body happens to belong to someone else. That’s disturbing enough, but if you don’t take special drugs you’ll start inheriting the memories of the previous body owner. Sure enough, Damian becomes interested in the past life of his new body (Ryan Reynolds) and the wife and child that was left behind in his death. I could make some joke about Reynolds inheriting Kingsley’s bad luck with roles, but I won’t.

There’s some decent build-up of the plot as the mystery of Albright’s research is slowly revealed. But by the second act, the pacing begins to jump all over the place as the writing becomes more ridiculous. When Damian finally catches up with the wife of the deceased man, an action scene breaks out as Albright’s goons attack the house. At this point, the movie becomes more action oriented as Damian quickly becomes an action hero. For some strange reason, Damian channels the skill of Liam Neeson by breaking bones and firing guns. I know that his Ryan Reynolds body is more physically fit, but it sure seems like a stretch for him to have acquired such skills off-screen. Perhaps he can see into the future as well when some goon with a giant flamethrower is waiting outside for him.

The rest of the movie struggles at finding a way to twist and turn the story for the purposes of entertainment. More ridiculous fight scenes are inserted. The relationship Damian forms with the daughters is played up way too hard with quick sentimentality. Even Damian’s methods for getting Albright to come clean becomes rather odd with him threatening his mother. It’s all staged and edited quite poorly as the movie zips through the moments of character development and dwells too long on the exposition. The movie doesn’t have time to explore an old man trying to get used to a young man’s body - it’s far too busy pulling out twists from its flawed thriller aspect.

I suppose what’s most frustrating about Self/Less is that it just can’t pick a tone. You think you’re watching a science fiction thriller, but then it just decides to be a darker action picture out of nowhere. Then it decides to insert some family drama. Then back to a mad science experiment. Then a car chase. Around and around it goes - always fast, but never arriving at a consistent genre. It’s a jack of all cliches and master of none. The results are more laughable for how some of these elements seemingly come out of nowhere - desperate to garner some level of entertainment that is never reached.

Self/Less could use a little more focus and sense to uproot a decent concept from such a bland production. I really want to root for Ryan Reynolds the way he tries so hard to find better, more challenging projects. I also want to root for Ben Kingsley in that his last movie before he bites the dust is not a forgettable one. They may have both read a great script of clever ideas by the Pastor brothers, but it’s merely a confusing smear of those ideas by the incoherent direction of Tarsem Singh. Here’s hoping they can shed this movie off their resumes and come back strong with a more worthy film.