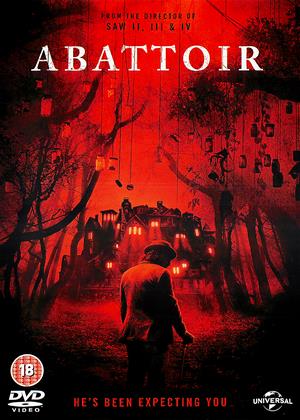 This is a wholly original concept realised in a traditional manner, at least for the first two thirds of the running time. The exception is the lead character Julia (Jessica Lowndes) and her detective boyfriend, who appear to have walked out of a 1950’s film noir project – her make-up, style and car are very reminiscent of that era, and Detective Grady (Joe Anderson) poses and shoots foxy small-talk as if he is a modern day personality of the Humphrey Bogart school of presentation. Not that this is a problem; it is unusual and arresting. The fact that no comment is made of their anachronistic personas places them in a kind of limbo.

The central concept, of someone who makes a habit of buying houses where gruesome murders have taken place, and then sets about removing the rooms where the victims died to make his own Frankenstein-style hybrid construct, is pleasingly perverse and outrageous. Events take a long time to reach this magnificent set-piece, but the wait is very much worth it.

As the strange Allie, Lin Shaye plays a seemingly tortured character who’s true nature is not (partially) revealed until the final frame. A scene in which she stares into her mirror, pulling the skin on her face taut, reveals inner demons that are never fully addressed. Without dialogue, it is a mesmerising moment, and Shaye adds to an already very strong cast.

Pieces fall further into place once Jebediah Crone turns up, surrounded by townsfolk followers. Dayton Callie plays him with a gentle, but persuasive authority, a sort of genial cousin of Danny DeVito’s Penguin character from ‘Batman Returns (1992’). The resultant patchwork ‘house in the woods’ is exactly the kind of impossible and monstrous dismembered collection of rooms such a mad-hatter character would construct. And here is where every apparent anachronism finds an environment in which it makes sense. These are the realms of the fantastic, and this is a pay-off I certainly was not expecting. Special and directorial effects (the latter courtesy of Darren Lynn Bousman) that have thus far been highly restrained, take on epic proportions suddenly, and are utterly brilliant: the true stuff of nightmare.

Entertaining and a Really Interesting story idea behind the movie ,Sadly it just didnt come to fruition.

The idea of Taking the Rooms of Crime Scenes and constructing a House from all the different tainted Rooms is an interesting one and could have made an excellent Movie, This not being that im afraid to say.

As always the Heroine is Annoyingly Stupid and does exactly what you and everyone knows she shouldnt do on every single occasion, She is supposed to be a well educated,smart young woman journalist, one wonders where she kept that intelligence as it clearly wasnt in her head !

The Sidekick /ex boyfriend /Cop was like some bad Film Noir ,Philip Marlow Crime /Comedy Character . and couldnt be taken seriously at all.

Poorly used great idea, that could have been Far Better if handled right ,but very Watchable and Entertaining .

Certainly not worth a second watch. enjoy it once and forget .